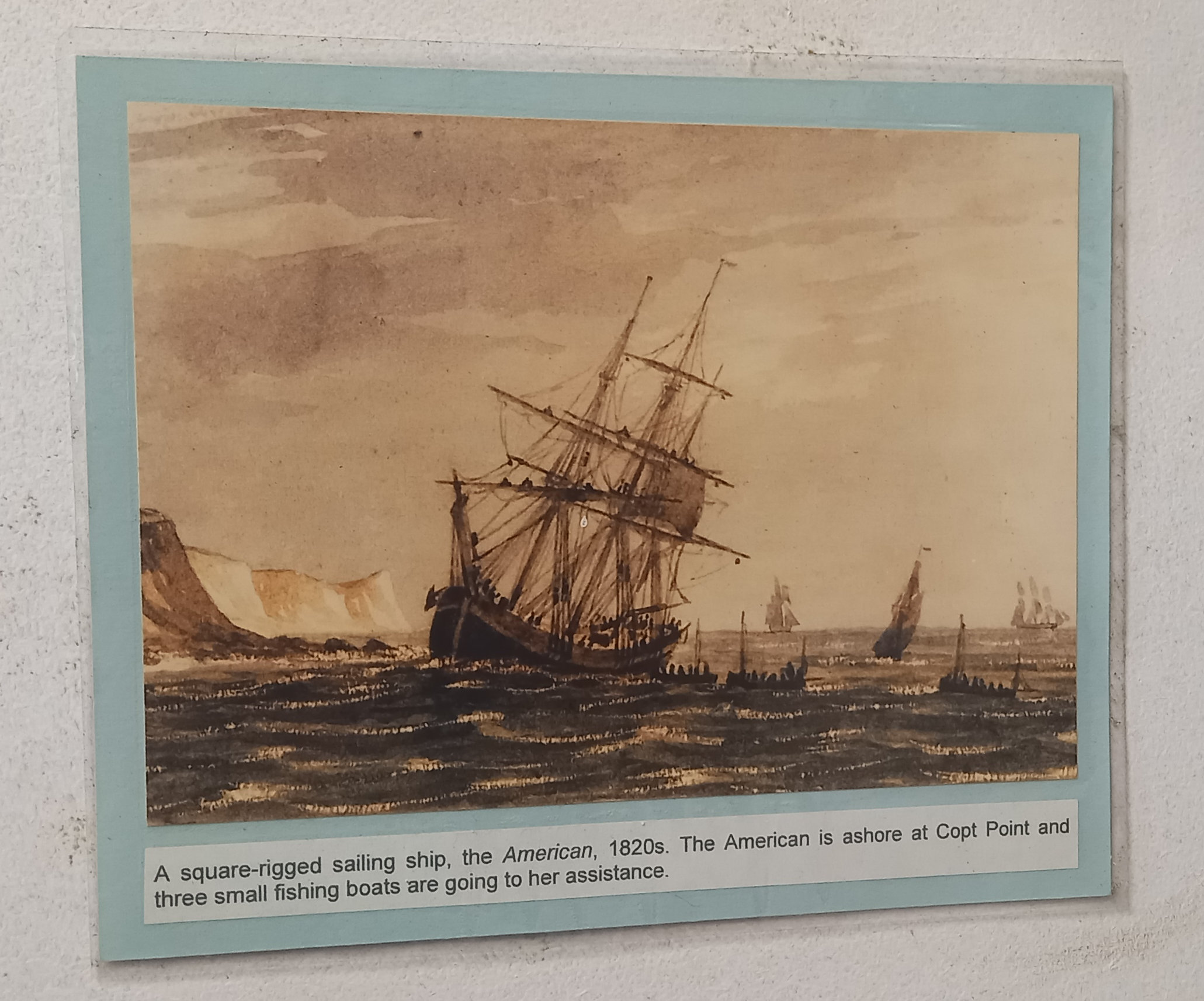 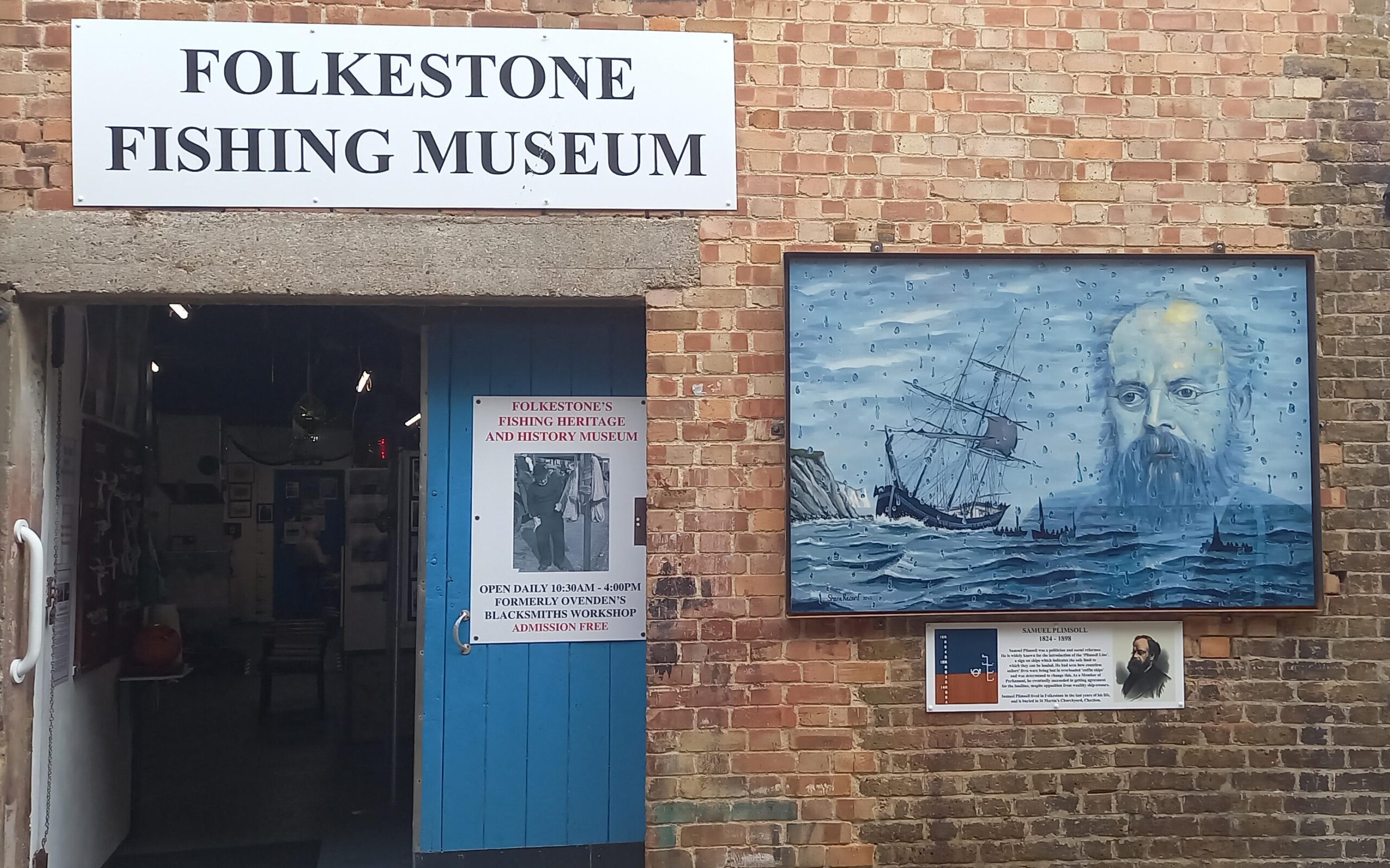 Samuel Plimsoll was a prominent politician in the 1800s.  His most famous work centred around the safety of sailing vessels.  The loading line, or the Plimsoll Line, was created to show how much cargo a vessel should carry to ensure it wouldn’t sink.  The symbol became inspiration for the later London Underground logo due to its association with safety and integrity.  Although Plimsoll was born in Bristol, and his parliamentary constituency was in Derbyshire, he lived his later years and died in Folkestone.  He’s buried in St Martin’s churchyard in Cheriton.

Journalist Nicolette Jones, together with Go Folkestone wanted to put up a memorial to Samuel Plimsoll in Folkestone.  He has streets named after him in over 15 towns in the UK, and when Nicolette moved in to one of these streets it sparked her interest to find out more about the man.  Her speech at the unveiling of the Plimsoll mural highlighted the importance of remembering Samuel Plimsoll:

“I wrote a book about the Victorian MP and campaigner Samuel Plimsoll, The Sailor’s Friend’, because I believe that those who strive on behalf of the underdog, and make the world a better place, should not be forgotten. This mural is a celebration of altruism and the possibility that determined individuals can make a difference to us all.

“He deserves a memorial because the agitation he led with his wife Eliza, was an epic legal, social, and political battle for justice. Together they worked to protect sailors against nefarious practices including overloading and the use of unseaworthy ‘coffin-ships’. Plimsoll campaigned for decades for an inspection for seaworthiness and a load line on the side of merchant ships, to set a limit on how deeply in the water they could safely sit. He took on the fat cats – wealthy shipowners – who loaded ships as deeply in the water as they could in order to make as much profit as possible, pocketing insurance if the ships sank, while it was sailors’ lives that were sacrificed. And sometimes the insurance was a scam that over-represented the worth of the vessel and its cargo.”

“Taking on the shipowners, including some of his fellow MPs, led to a backlash of libel cases and vilification that almost ruined Plimsoll, but his drive and passion made him feverishly popular with the public; he was the subject of plays, novels, street ballads and music hall songs. With the demonstrative support of the nation, he faced down his enemies, came close to ousting Disraeli’s government and achieved lasting safety measures for merchant sailors, including the Plimsoll line, the load line that immediately bore his name.

“The load line eventually became an international standard and it is impossible to quantify the number of lives it has saved.  We only know that in the mid-19th century, before Plimsoll, some 500 British sailors a year were drowning because of overloading and unseaworthiness, often in conditions no worse than a strong breeze. And that transatlantic ships were sometimes loaded as deep in the water as canal boats. One sailor’s widow reporting to an inquiry after the loss of her husband’s ship said that after she said her last farewell to him on board, she stepped up from the deck to a rowing boat that lay alongside.

“Thanks to Plimsoll, sailors are safer today. And his cause was a milestone in the history of the industrial revolution finding its conscience and the introduction of safety measures to protect working people.” 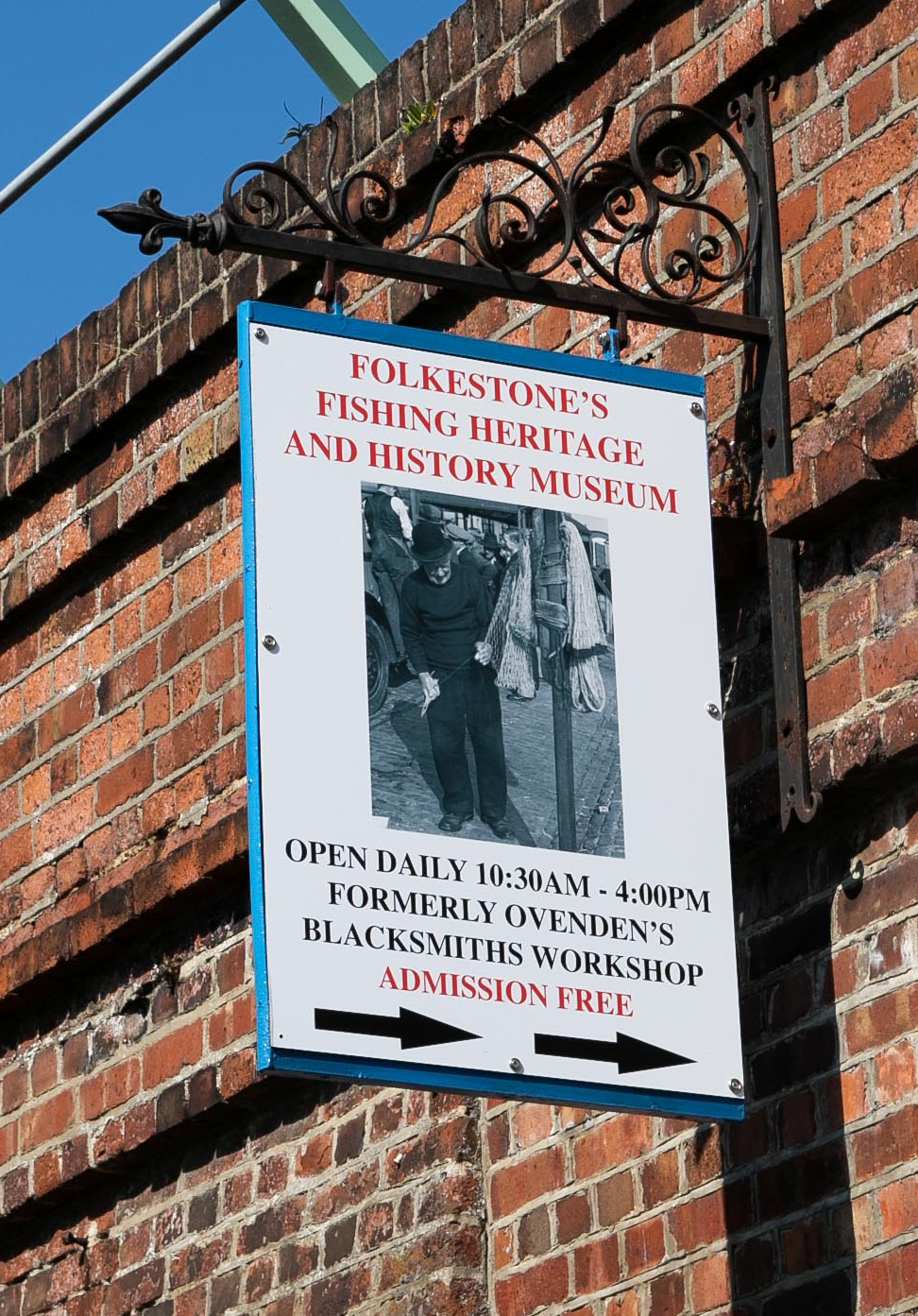 for the record – shane record

Samuel Plimsoll retired to Folkestone at 68 years old and lived at 31 Clifton Gardens and then at 35 Augusta Gardens which still bears a plaque.  The Plimsoll Monument on the Embankment in London was sculpted by the same man who created the Folkestone War Memorial on The Leas: F V Blundstone. Nicolette continues: “While he lived here, for instance, he sat on a landmark Royal Commission about labour relations.

“He also travelled to the US and persuaded the American authorities to remove anti-British sentiment from school textbooks. This created a generation of Americans willing to support the British when it came to two World Wars, so Plimsoll fathered the Special Relationship and changed the course of history.

“Locally he laid the foundation stone for the Folkestone United Reformed Church, now visible inside the building, although it is at St Martin’s Church in Cheriton that he is buried, in a grave he now shares his wife Harriet and his daughter-in-law Mary. At his funeral, flags flew half-mast in Folkestone harbour, and a crew of sailors removed the horses from his hearse and drew his coffin from his home to the churchyard themselves.”

“I am thrilled that the mural recognises a Folkestone hero as he deserves, and I am very grateful to all who persisted with the idea of a memorial and made it happen.  As Shane said at the unveiling, the use of a reflection in the image invites onlookers to see themselves reflected too: it is an invitation to altruism, to follow the example of Samuel Plimsoll to act on behalf of others and make the world a better place. I hope too that it means that a new generation of local children grows up knowing who Plimsoll was.” 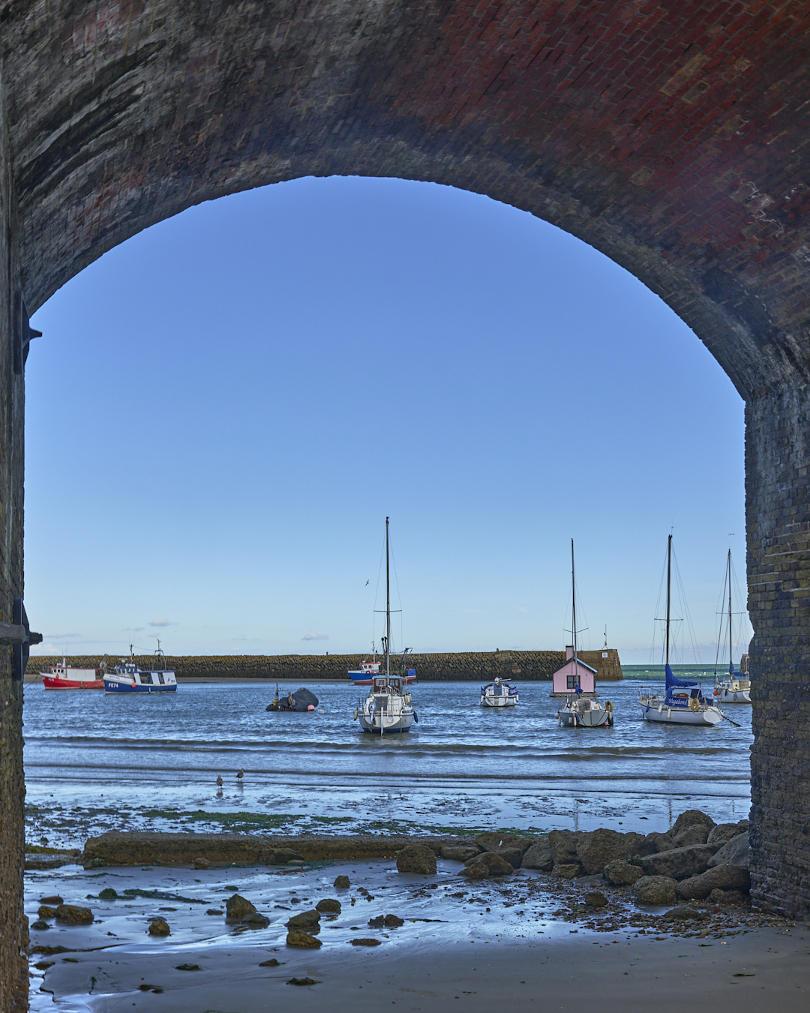 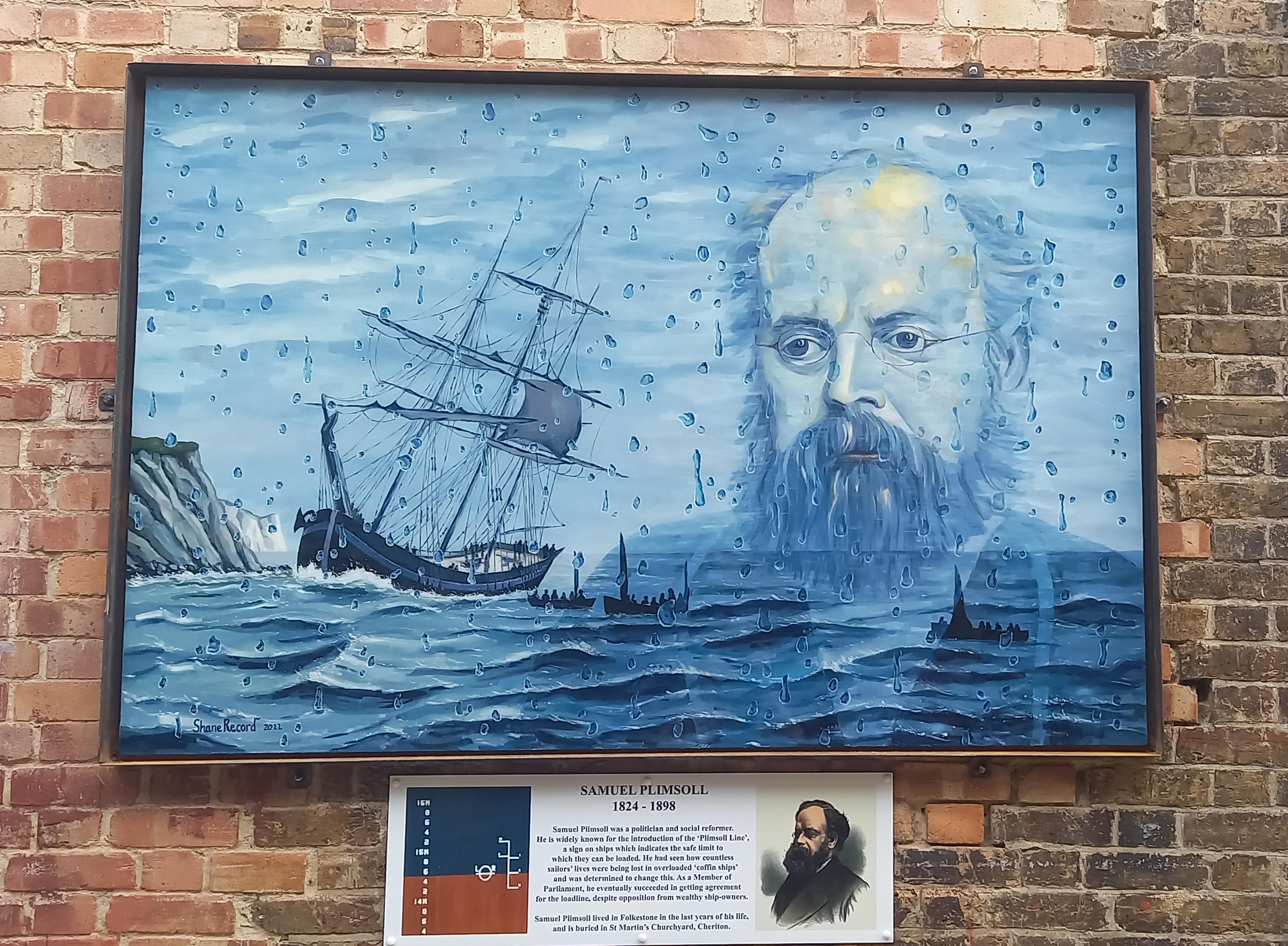 Local artist Shane Record was privileged to be awarded the task of creating the memorial for Samuel Plimsoll.  The brief was to have a commemorative picture with an image of the man in it.  The Folkestone Fishing Museum and Josh De Haan (owner of the building) decided that the mural would be placed on the outside of the museum near the entrance.  With these decisions made, work on the mural began.

“I knew that Samuel Plimsoll had links to Folkestone, and that he had initiated the safety load line on ships but other than that, I didn’t know a great deal about the man.  I did a lot of reading, including Nicolette’s book and read his impassioned speeches too.  The Fishing Museum were partly funding this memorial and so I went down to the museum to talk to the fishermen.  They showed me a little reproduction of a 19th Century painting.  This was of a cargo ship going down in the sea around Copt Point and that’s where I got my idea.

“If you look at the painting you will see the reflection of Samuel Plimsoll looking out of an imaginary window somewhere on The Stade.  He’s looking at this ship that’s sinking and of all the local fishing boats that have gone to help rescue the cargo and the sailors.   It’s an image that he could have seen.”

“We’re seeing his reflection which means that we’re standing with him, and becoming part of that collective conscience to take responsibility.  He made many speeches about the safety of sailors and ships.  Once the Plimsoll Line had come into being, he went on to fight for the safer passage of cattle and other animals on ships.  At that time, animals were transported in incredibly harsh conditions.

“Creating the reflection of Samuel Plimsoll in the window was incredibly hard to do.  I’d put raindrops on to help us know there was a window there.  The painting is done on marine grade plywood so it will last for a long time.  It’s also been covered in resin and sealed so that it will withstand the weather outside the museum.  I had a friend, John Evans, who’s a local artist, to resin my painting.  I had noticed on his paintings that the resin really makes the colours stand out ; the darks and the lights really sing.”

Co-funders of the memorial, community group Go Folkestone are also incredibly proud of the mural.  Angela Conyers said “I think Shane’s painting is amazing. In this large and striking commemorative work,  he has really captured the sadness on Samuel Plimsoll’s face as he gazes out through a rainy window at a sinking ship in a stormy sea. I am delighted that we now have such a fitting tribute to a great man here in Folkestone.”

The mural is Shane’s first outdoor piece of artwork on show in Folkestone.  It can be seen on the wall adjacent to the entrance to the Folkestone Fishing Museum.

Salt + Earth – Festival of Landscape, Seascape and the Environment
The First Black British Officer – Walter Tull
The Warren – One of the Most Beautiful Places on Earth
Shorncliffe Heritage – The Birthplace Of The Modern British Army