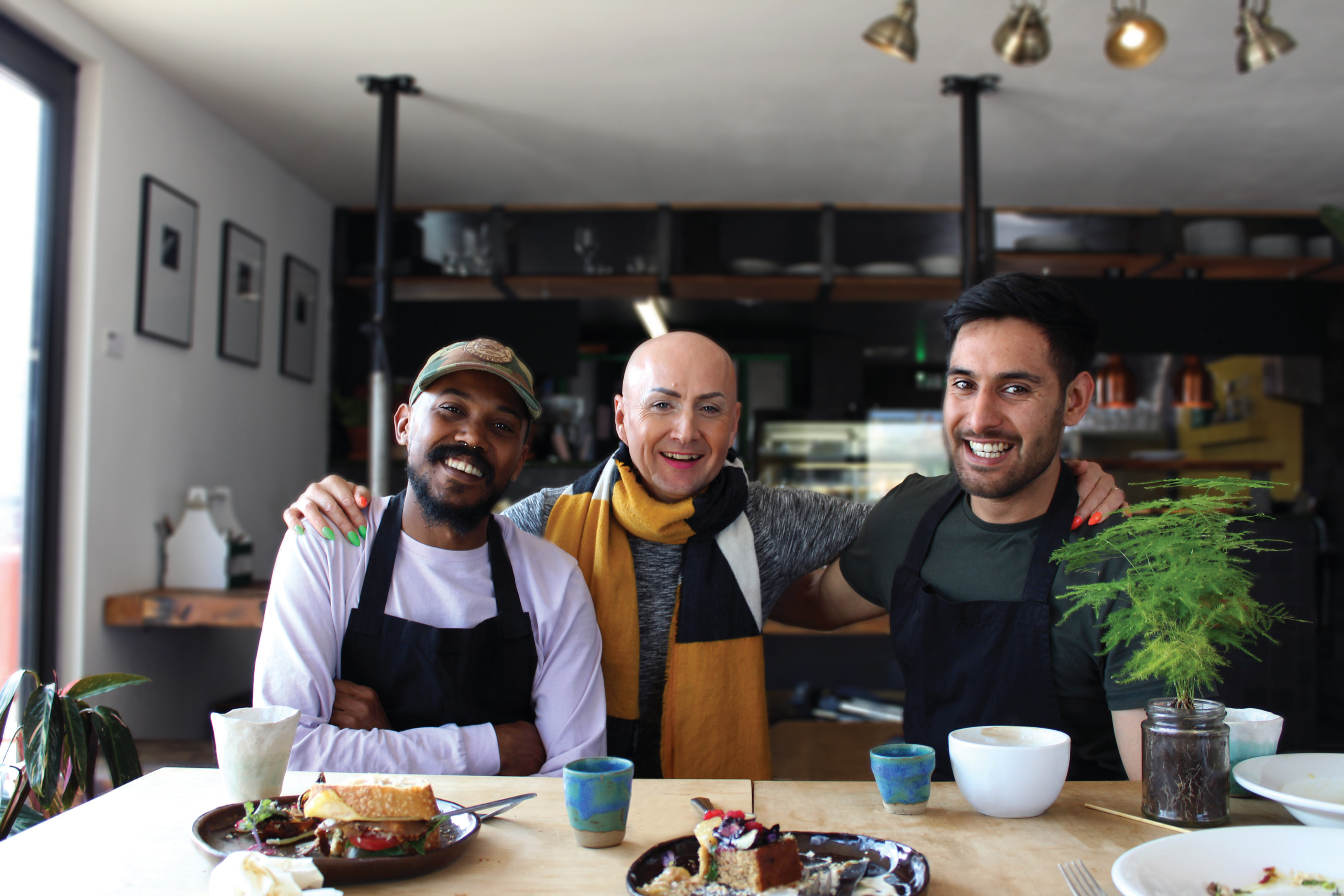 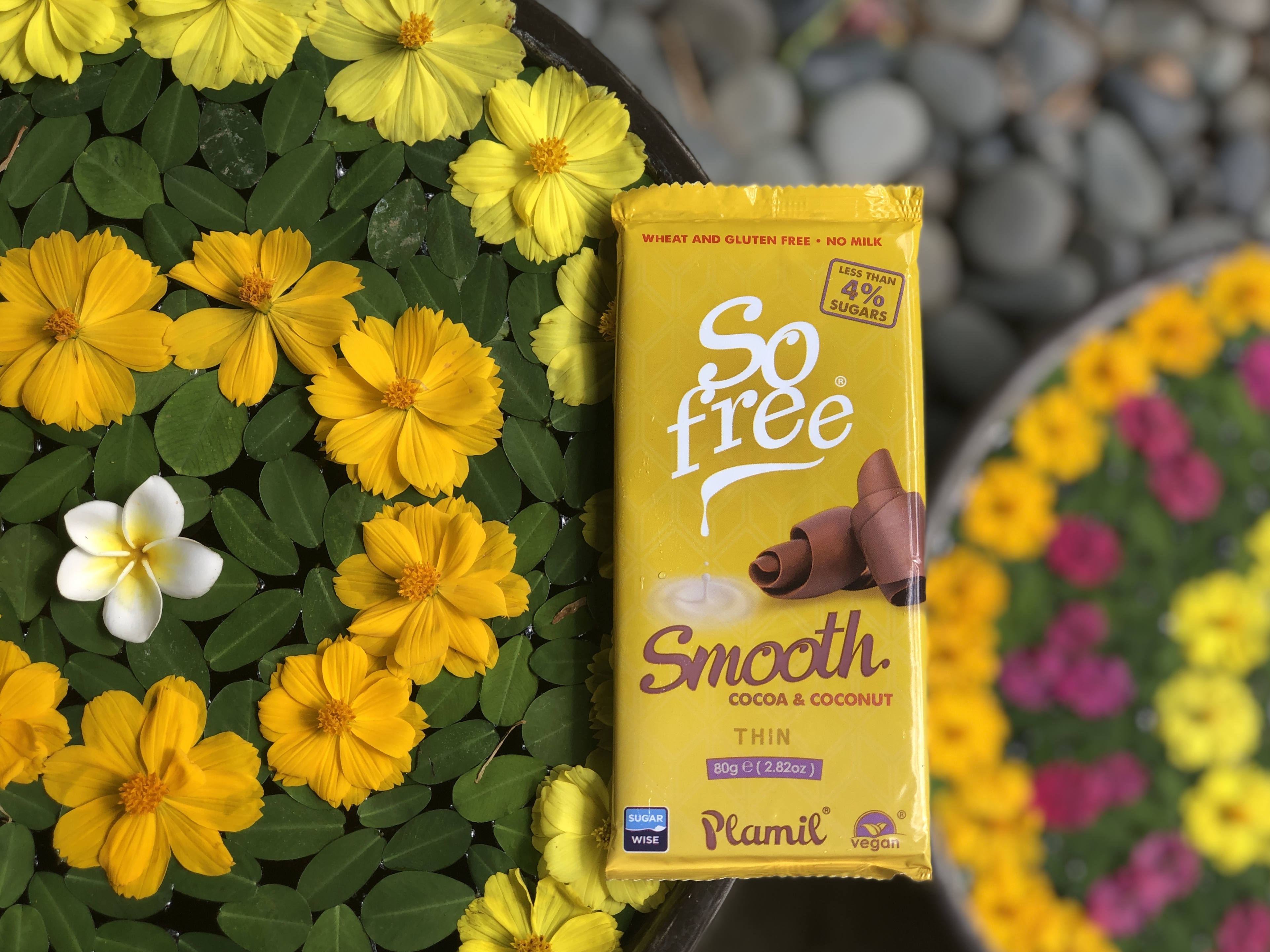 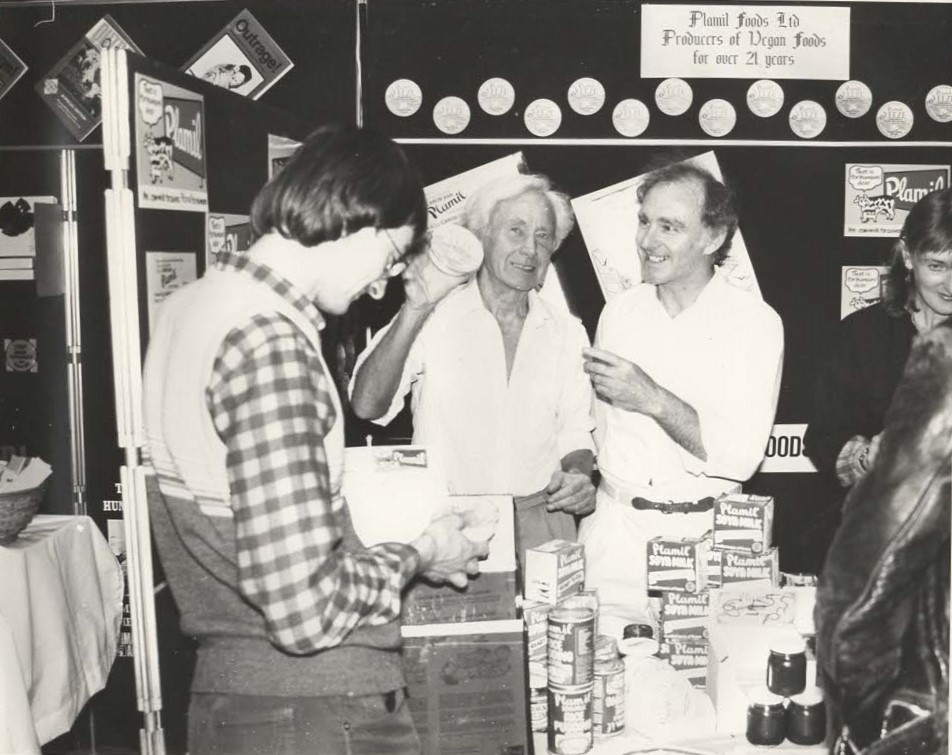 Plamil – Plant Milk – is a factory producing vegan chocolate in Folkestone.  It’s been leading the way in vegan food production since the 1950s.  In the 1970s, Arthur Ling brought the company here from Slough. Arthur’s son and Managing Director, Adrian Ling talks about what it’s like to be ahead of the game in business and food production.  And Folkelife got to try chocolate too!

“My father went vegan in 1926.  He saw a fish being killed when he was on holiday when he was 7.  He decided he’d never eat flesh again. Over the next few years he realised the suffering that cows felt in the dairy industry and he stopped drinking milk too.  So he was vegan before the term existed.  I suspect there were others too as in 1944 Donald Watson started the Vegan Society and my father was involved from then on.”

“One of the first things the Society did was to form a subcommittee to look alternatives to dairy milk.  My father worked with Dr Franklin and Lesley Cross, who were powers in the vegan movement at that time, experimenting with different ‘milks’.  It’s incredible looking at these processes and realising just slow and difficult things would have been then. We have a photo of them making the first milk alternative using cabbage protein.” 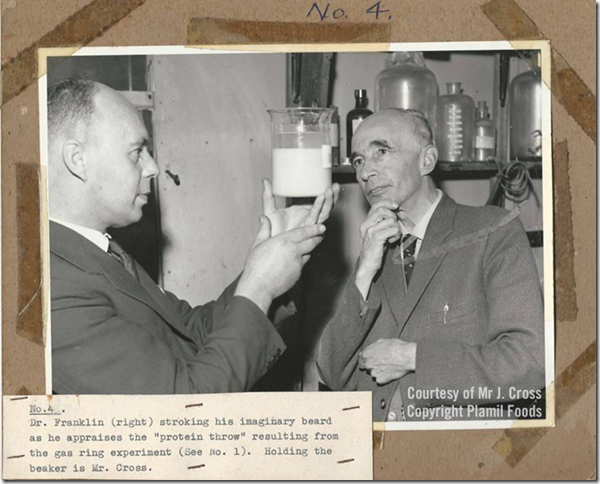 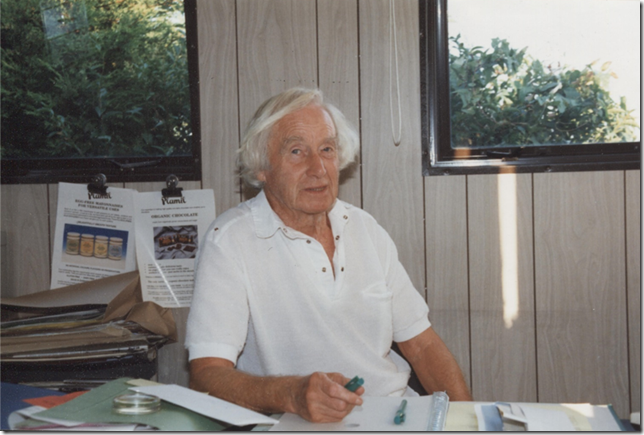 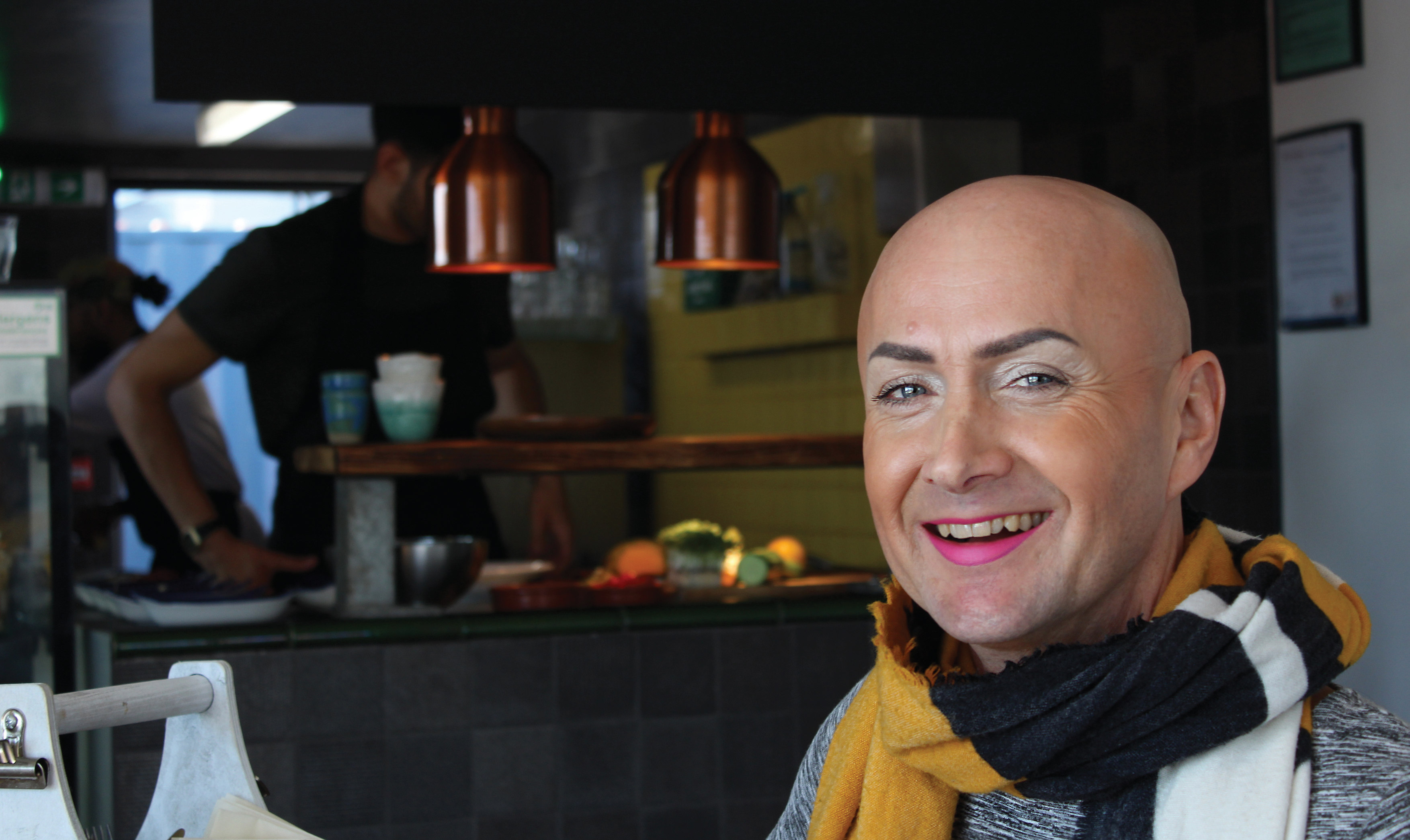 spreading the news by word of mouth

“There was no social media obviously, so someone wrote to one person, and they would make a note on the letter and send it on to the next. It’s amazing anything happened!  Then, of course, they had to fund it.  Nowadays we have crowd-funding, but back then it was much harder.  Things were also incredibly slow post-war too.”

always at the cutting edge

Adrian’s father started out working in Wales in a biofuels company.  He worked with sunflower oil, converting it for farmers to use in their machinery.  Their benefactor came from Scotland and the company was way ahead of its time.

“They were driven out of business by the petroleum industry.  I imagine it wasn’t a friendly interaction!  But, their funder said if ever they needed money again…Well!  That helped in researching vegetable protein ‘milks’.   They experimented with cabbage, peas, actually, they used a lot of the proteins we use today.”

“We produced a pea protein milk in the 1990s, called White Sun.  It was about two decades ahead of its time.  We spent a lot of money promoting it and people said ‘why do you need another milk, you have soya?’  Now, you look at the choice and there’s rice milk, and so many others.  We do find we’re way ahead of ourselves!”

Plamil saw the reports coming from the US about soy milk which was unheard of in the UK.  They became the first commercial producers of soy milk in the UK.

“You have to bear in mind that the number of people who were interested in this type of product was negligible.  But we have reports of the first Plamil products being sold fresh, in cartons, in the London area!  It was a case of educating people as they couldn’t really see the point in the product.  Why would you need it? Medics would say ‘why do you need soya?  Cows’ milk is the best thing’.  There was a large resistance to it.  Yet, the health benefits were there, and so, of course, the reduced cruelty to animals.  And that’s how we got customers on board.”

“I think people chose veganism for a variety of reasons.  Be it to prevent animal cruelty, or because it’s a healthier way of living.  More recently, I think people have come at it from the environmental argument.  That argument has always been there though.  It’s gained traction and recognition that the vegans in the 1960s were actually right you know?  And had been right all along!”

“Back in the 60s, the soy milk was sold in cans.  It was a concentrate to save transporting water, it was unbelievably environmentally friendly. When I joined in the 1980s, you can see from the photo we were still making concentrated soy milk.  However, everyone was asking for something that could be instant use. We have always pushed the point that there’s less water to transport, it’s more environmental.  But even then people were wondering why we were using those arguments.”

Listening to Adrian, he has a delightfully calm manner.  He talks about how his dad, and he, have pushed for the British public to have access to plant-based food products.  It’s clear that they are visionaries, and working way ahead of their time.

“We find we’re way ahead of the curve in a sense, not necessarily to our financial benefit!  That’s something we’re learning, or trying to get ahead of as well!  People do look at us and say ‘What?  You know, we don’t quite get that!’  In another 20 years, our innovations will be accepted.  It’s having the guts to have that vision and being able to see it through.”

Swimming against the tide

“Where we’ve come from is that we’re not only a brand, but we’re actually a company that will do what is right.  Maybe we swim against the tide, and really push the boat out, but we’re not afraid to ruffle the feathers.  We try to do what we think is correct. There’s right and wrong, and a big grey bit in between!  As long as we can do as much right as we can then we’ll go down that route and fight, and push our corner.  If others follow, then we’ve done a good service.

“I come back to the point about these photographs of the initial soy milk.  Here are two men showing how to make cabbage milk.  It’s the start of the vegan movement.  The photograph is literally of two people deliberately manufacturing something that was to be an alternative to dairy.  Now, that’s got to be the start of the vegan movement!  As Plamil has grown, it’s therefore forged what we now see as veganism today.” 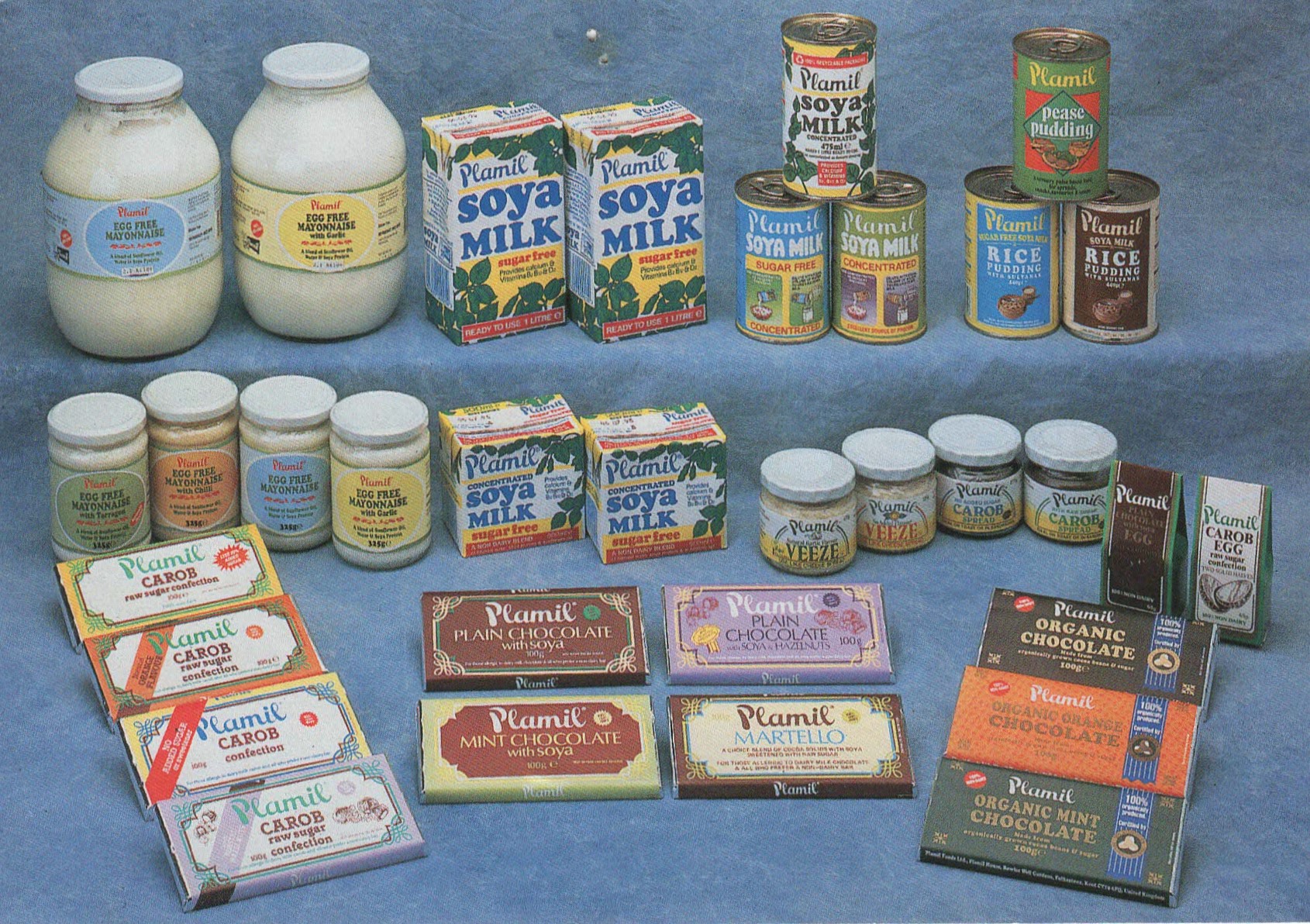 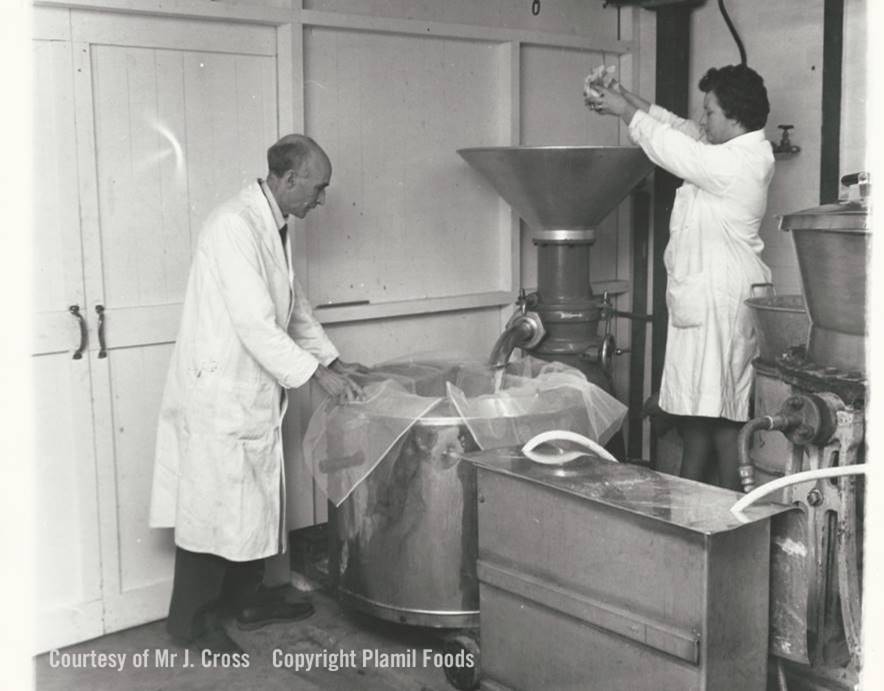 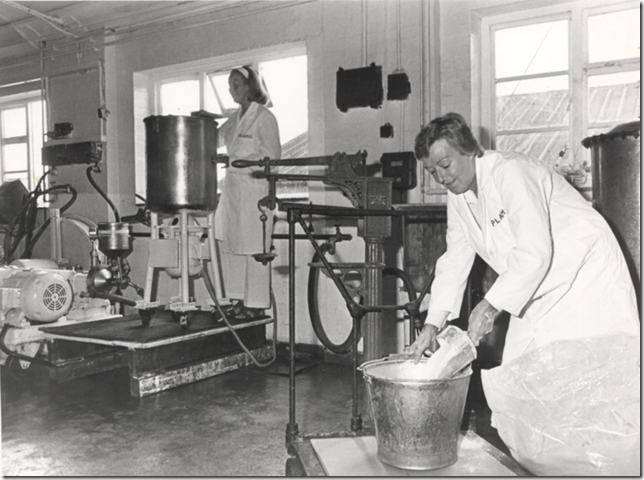 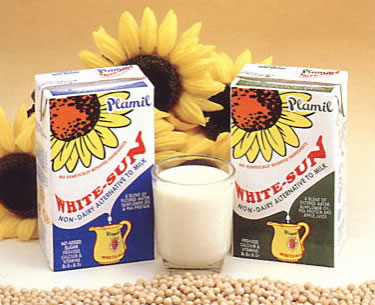 Plamil moved to Folkestone in 1972.  The original factory in Slough was being demolished to make room for the M4.  Ironically, the building that Arthur Ling found was a former dairy, with sloping floors.  They made liquid products, focusing on the dairy alternatives they’d been experimenting on. In the 1980s, when Adrian was at university studying mechanical engineering, his father rang him up.  He wanted Adrian to come and work with him to make vegan chocolate.  It doesn’t sound as though it was a hard decision for Adrian to make.

“I could see that mechanical engineering wasn’t going to be a sparkling career! I joined Plamil in order to make a purely vegan chocolate.  We bought lots of machinery and started work.  In the 1980s you could really start seeing the change in mentality.  Soy products gained popularity.  It reminds me how far vegan chocolate has come.  Now, there’s a new brand every 5 minutes.  In the 80s, we were seeing that with soy milk, everyone was piling in.  After a while, some dropped off.  Now we’re left with a few major brands.”

“We made our first bars, only running off small batches of 100 bars at a time.  Within a few weeks we had a milk version, mint flavour and then they grew and grew.  We want to be able to offer ‘free from’ products and be sure that there’s no contamination.  We stopped producing a hazelnut bar so that we could guarantee to our customers we ‘did not contain nuts’.  Customers from everywhere in the world suggested flavours for us to manufacture.  We did a chilli one for one country, and someone else asked us to do a no-added-sugar bar too.  That was about 10 years ago.”

Always wanting to be on the ‘right’ side of business and manufacture, it’s essential that the ingredients come from ethical sources.

“We were the first UK chocolate manufacturer to be certified organic, and we soon followed that with other ethical certifications too.  We are always trying to avoid child labour, and that’s a massive thing in the chocolate industry. Child slave labour is probably the thing that identifies a lot of the ethical certifications that are about. All of our cocoa comes from an identifiable source, a certified trader.  It wouldn’t make sense to say ‘we’re vegan, but we don’t mind about child slave labour’.  That doesn’t run true.”

the price is to the planet

“We see there is a distinct trend of people wanting the cheapest vegan items.  I worry about that.  It seems the supermarkets are fostering these types of products.  From our point of view, we go back to the ethics of the people who started Plamil. It wasn’t just to be vegan, it was to be environmental and to have all those other ethical values too.  At the time, people might not have used the term ethical.  But now we do, and we avoid purchasing from countries that are deemed to be oppressive regimes.  We follow the ethical consumer guide criteria.

“We do a lot of things in the background, people might not see it but we try to do the best we can. That comes with a price though.  If someone says to me ‘why is your bar a few pence more when I can get something similar cheaper?’  Well, actually, we put all these other efforts into bringing you that product.  I do believe you get what you pay for, and the price is not everything about the food.  The price is to the planet, to the people and population as well.” 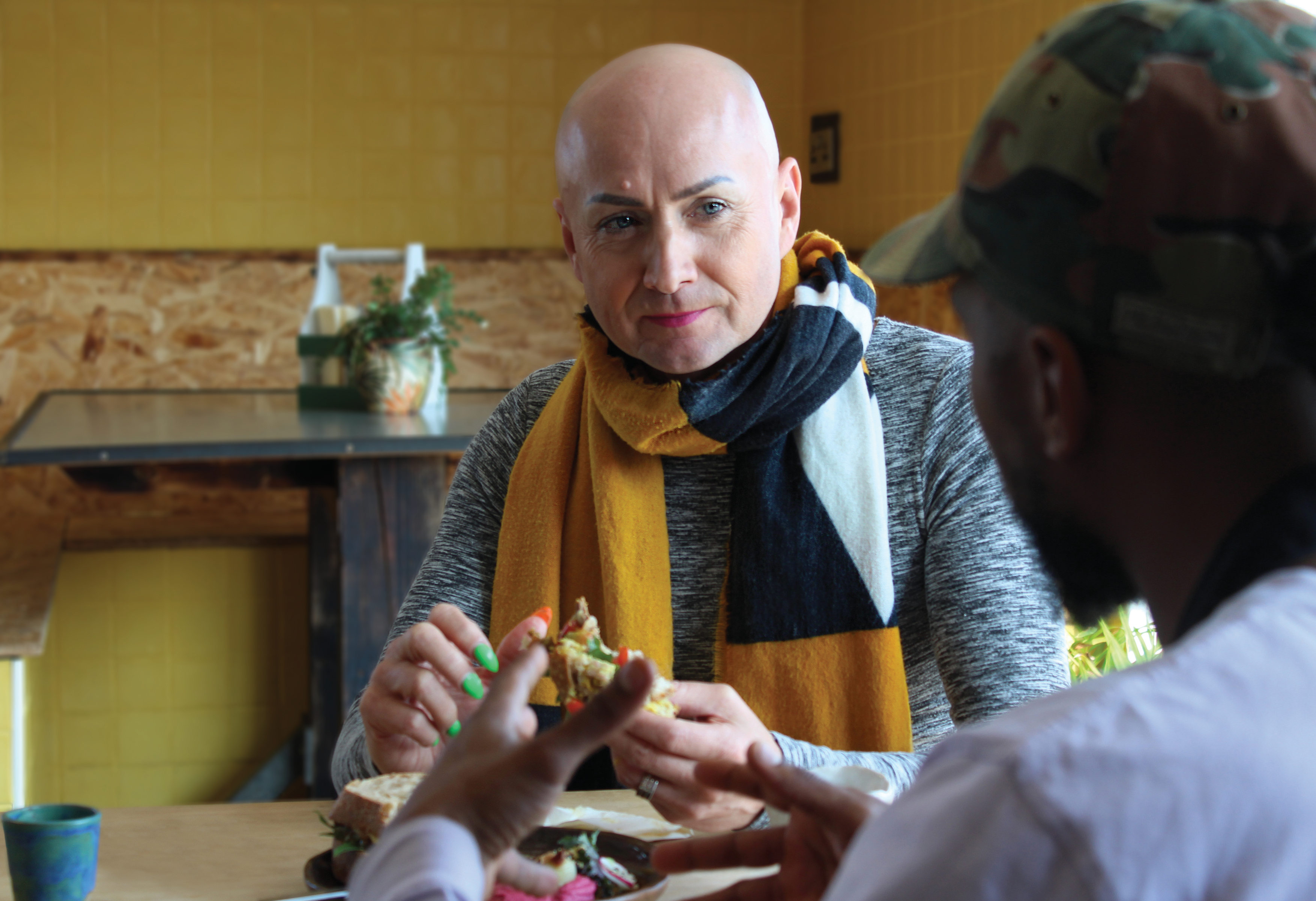 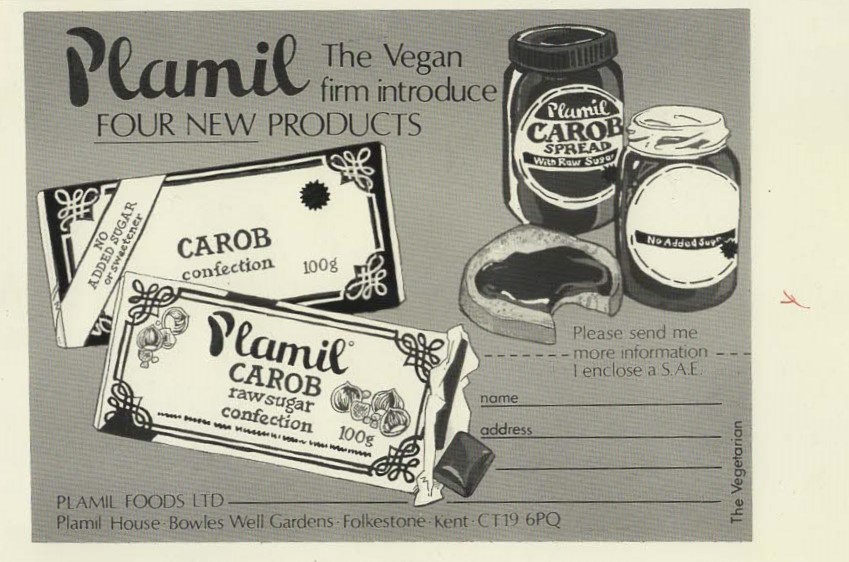 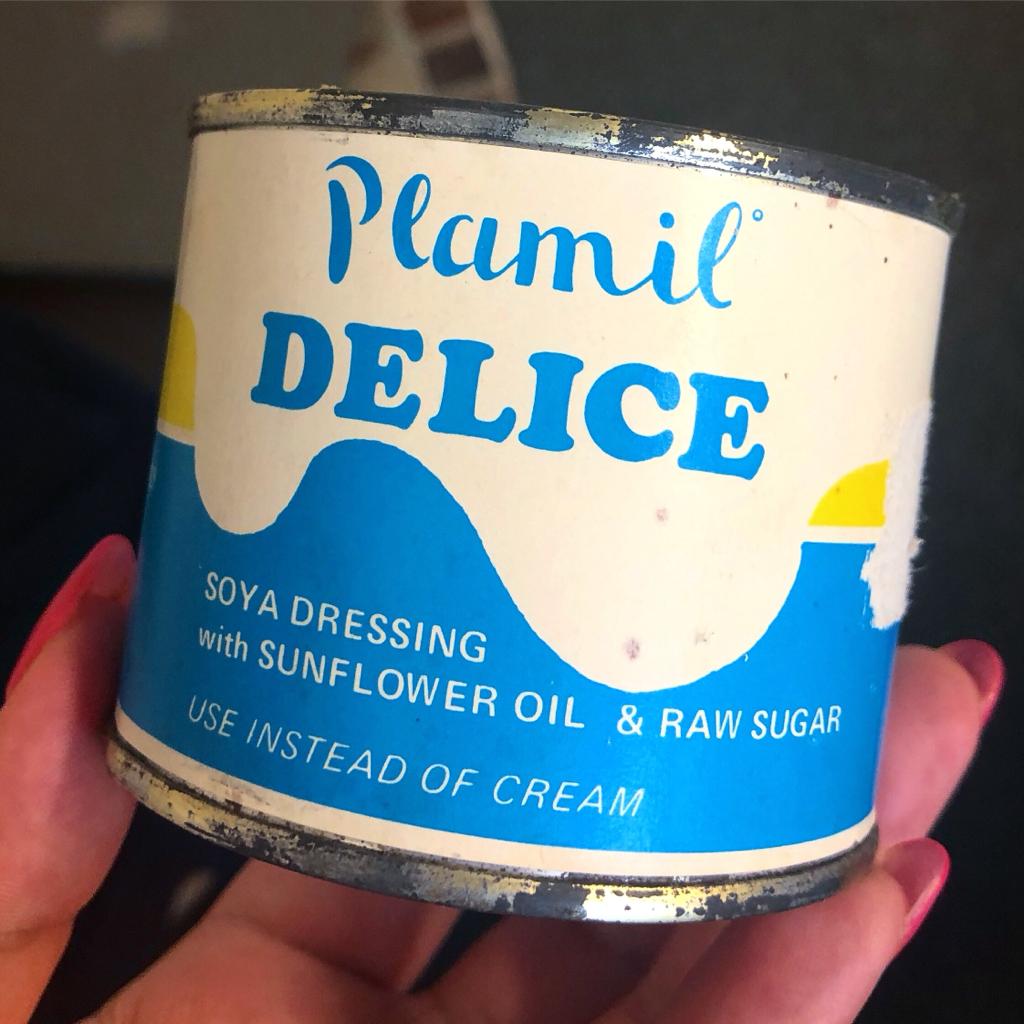 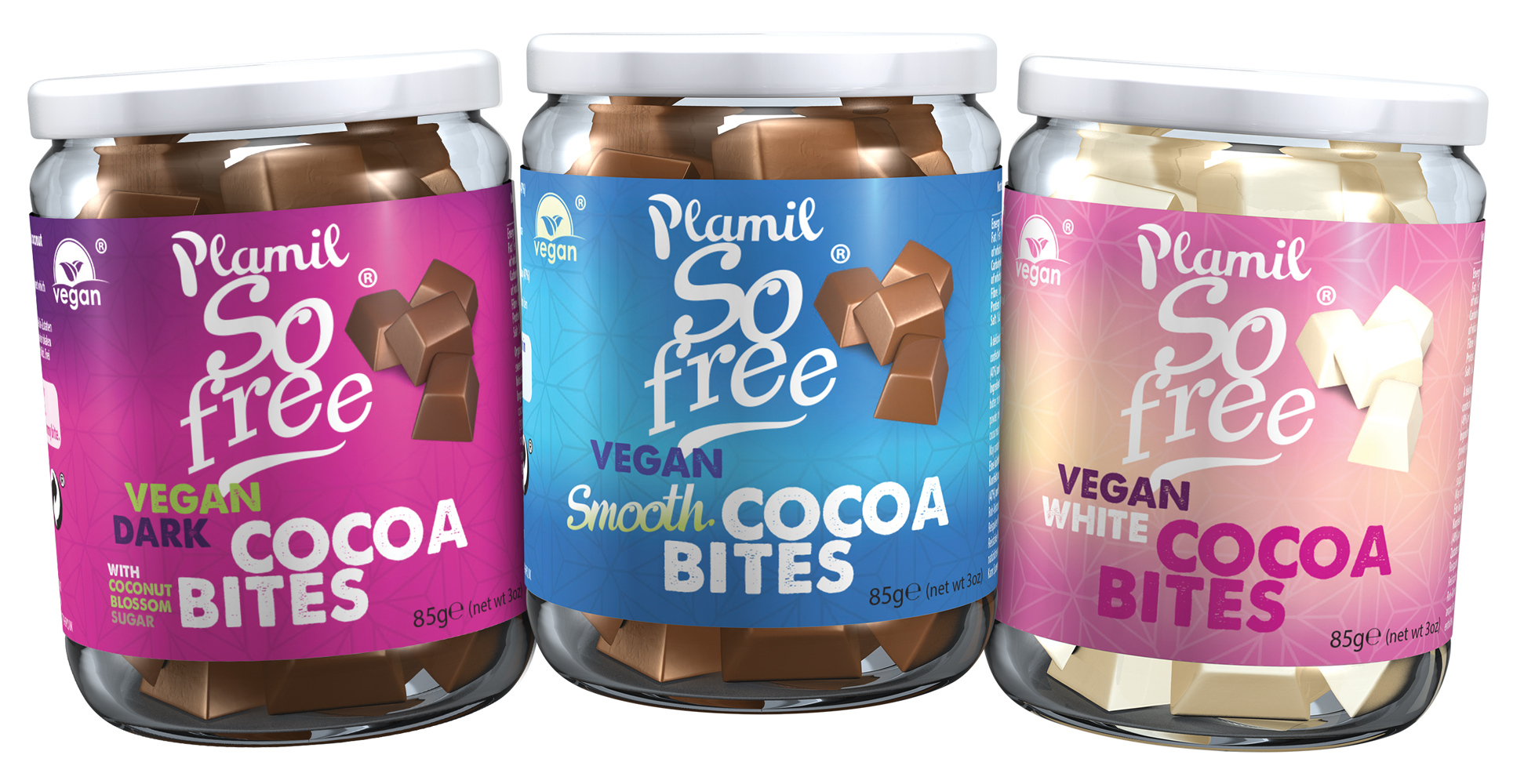 It’s so easy to be vegan

Adrian smiles, pressing together his beautifully manicured nails, and reminisces about his father.

“My father said in the 1980s that vegans didn’t even know they were born!  Access to vegan food then was so much easier than it was when my father started being vegan.  Now, it’s even more so.  I love what Folkestone has to offer on the vegan food front.  Dr Legumes, what those guys are doing is phenomenal!  I love eating there.  When we go, we never know what to choose, so we always have it all!

“There are so many vegan offerings now but you do have to be careful.  I bought a sandwich the other day and it was really quite disgusting!  You need good food, nutritious food.  That’s why I love Dr Legumes.  They think about what they’re serving; it’s local and it’s plant-based, and it’s absolutely delicious too!”

Adrian, quietly musing on a Dr Legumes meal memory, is roused back to the room by my question of what next for Plamil?

“We’re always looking at what’s next, around the corner.  Packaging is a big issue.  Wrapping chocolate is difficult if you want to protect it, and prevent contamination.  We’ve thought long and hard about using packaging that’s recyclable and we’ve come up with this.  It’s a simple idea, and been around for a long time, just not used with chocolate…”

Adrian puts a glass jar on the table.  Inside are little chocolate bites.  Plamil are selling jars of chocolate that you can refill when you have an empty jar.

“The problem with having a jar of small chocolate bites means that you probably eat more than you would if it were a bar. But..!  The jar is easily recyclable.  The lid is too.  If you can refill the jar with chocolate, all the better!”

Plamil chocolate is manufactured in Folkestone and available around the world.  It’s also available in Folkestone too.  The Folkestone Wholefood Shop on the Old High Street will refill your jar anytime!