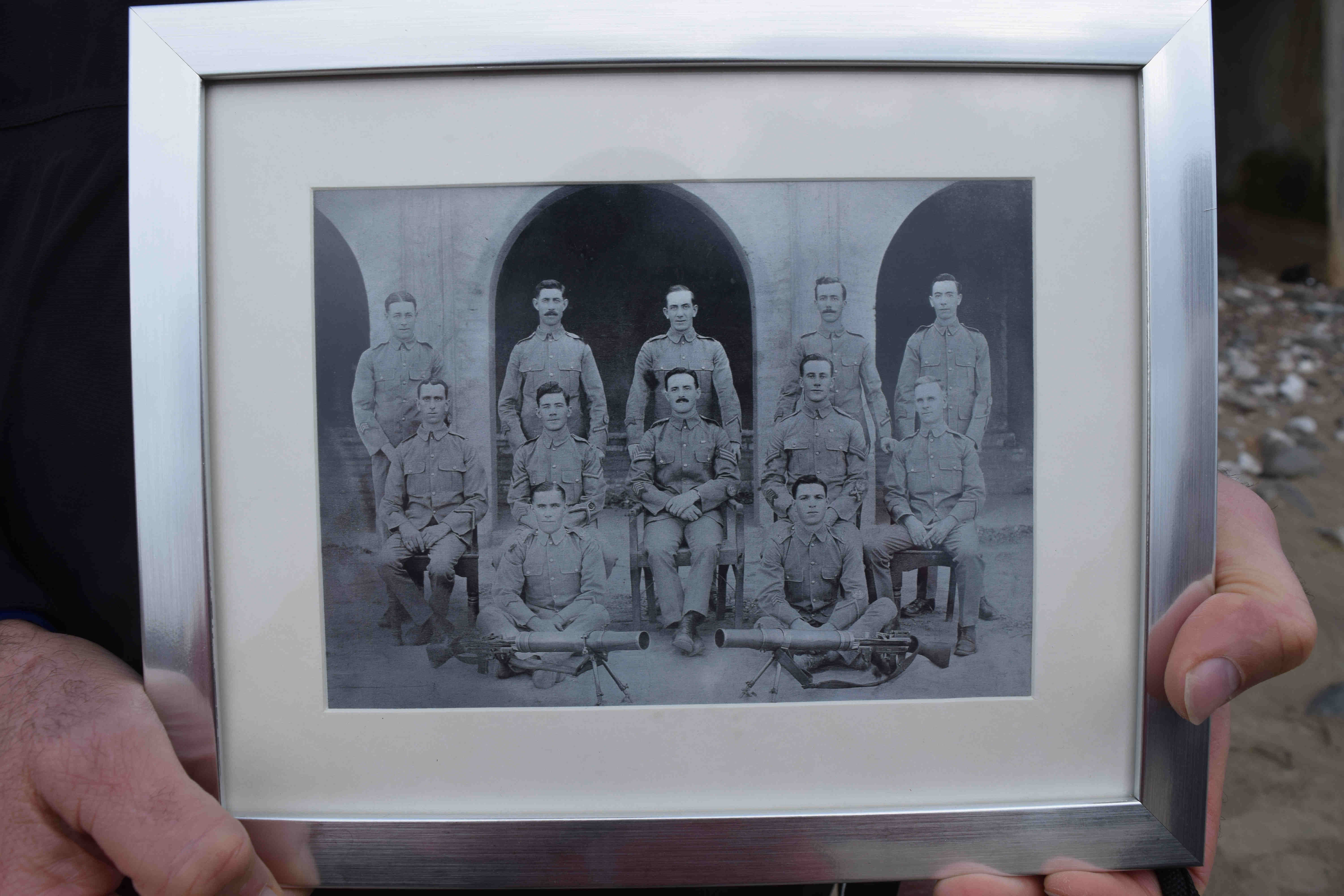 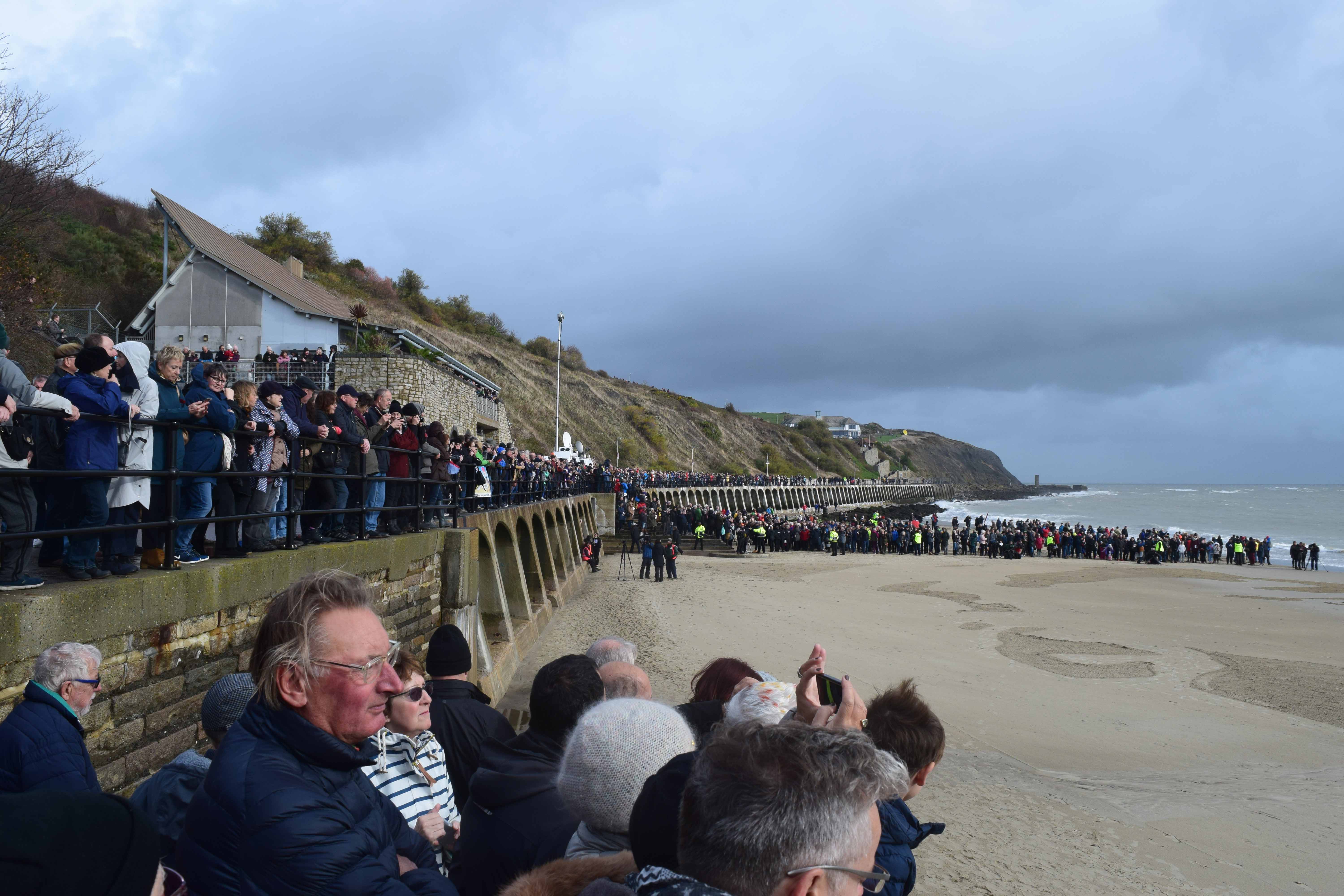 Danny Boyle, the British film director, chose Sunny Sands beach in Folkestone to launch the nationwide 14-18 NOW Pages of the Sea project. From 1916, Folkestone Harbour was the departure point for soldiers going to the Western Front. Tens of thousands of soldiers left, many never to return. This creative tribute to the fallen of WW1 saw faces of 12 soldiers created in sandy beaches around the country. On 11th November 2018, the public watched as these faces were washed away by the tide.  It was our opportunity to say a final thank you and farewell to all the soldiers and civilians that these 12 faces represent.

Poet Wilfred Owen was the face on Sunny Sands. The artwork began under torch-light before dawn, on a windy and wet 11th November morning.  As the tide moved out, the beach extended to reveal the image, many hundreds of Folkestonians came from over the cliffs and across the harbour to witness the artwork.

Local artists Ben Braudy and Angus Cameron supervised the creating of an army of sand soldiers using stencils and rakes. These looked eerily like shadows of those standing on the beach, yet there wasn’t much sun to cast a shadow.

As people milled around the beach, there was a sense of community and unity in wanting to be a part of this commemoration.  Later in the day, the Mole Café opened for the last time on the Harbour Arm.  This was a memorial to the café where soldiers had a last a cup of tea before they left for the continent on their way to war. 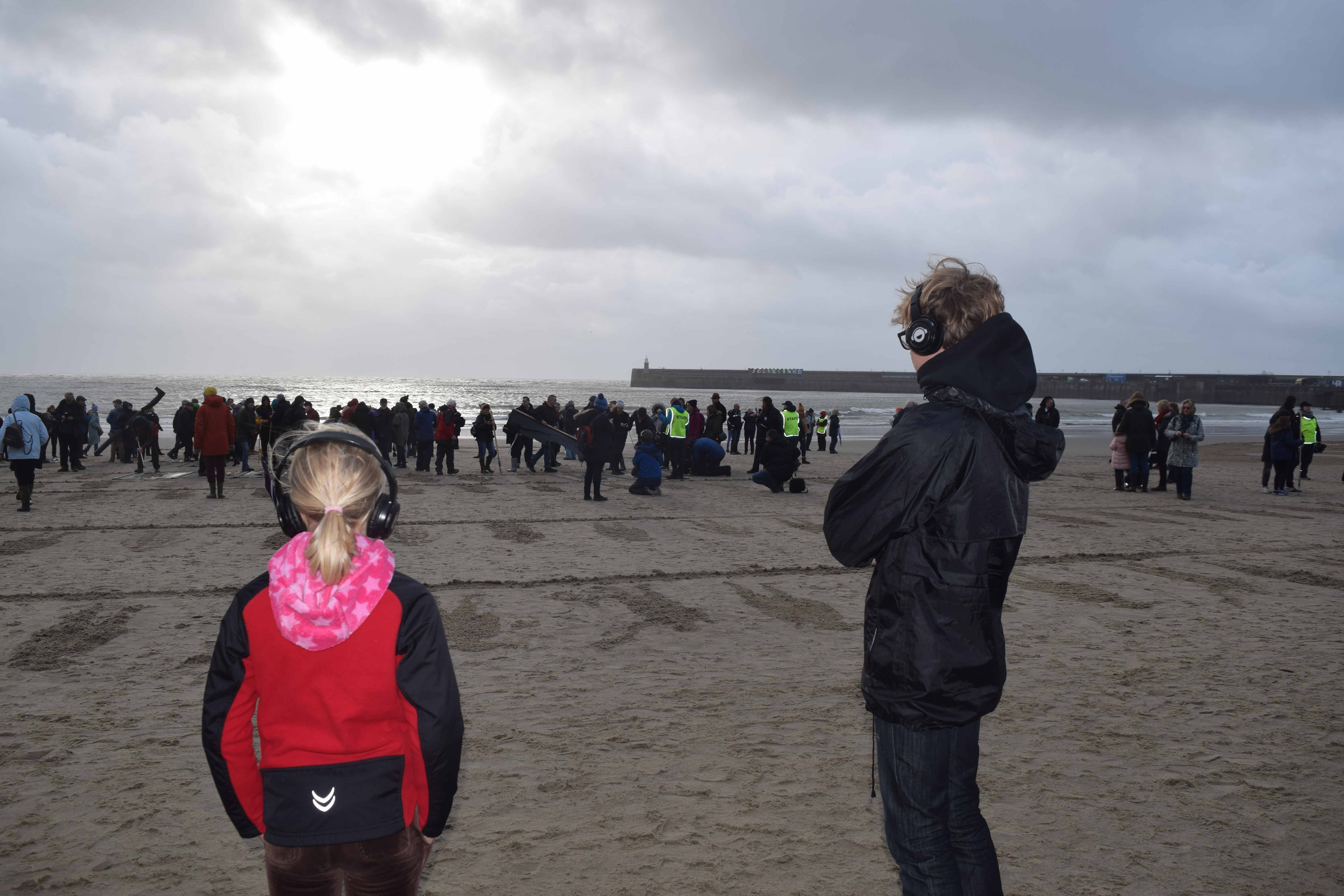 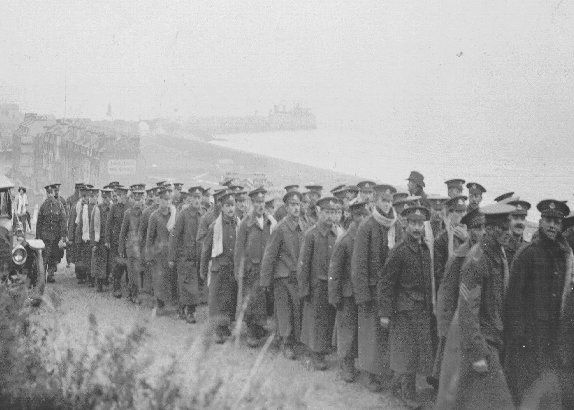 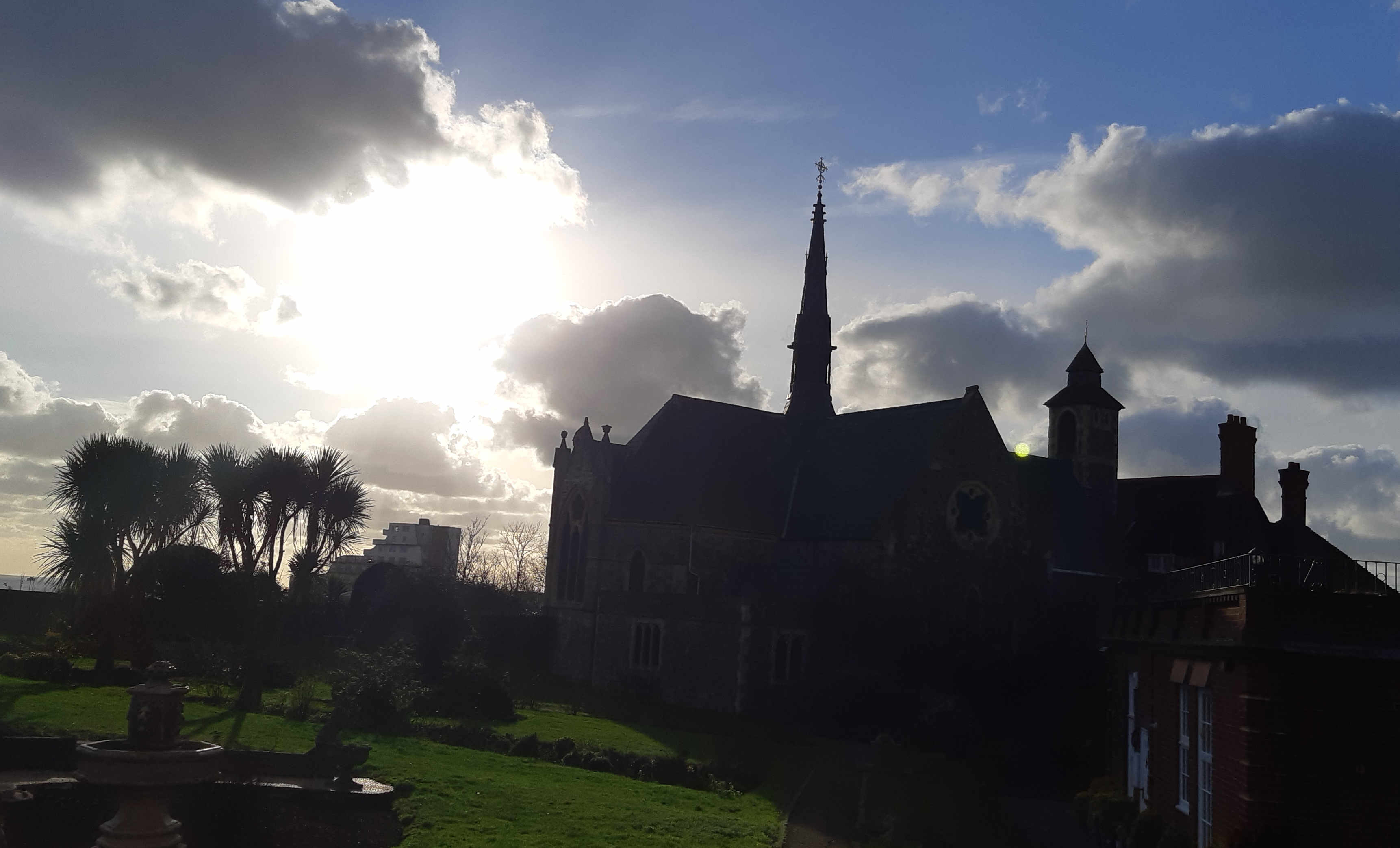 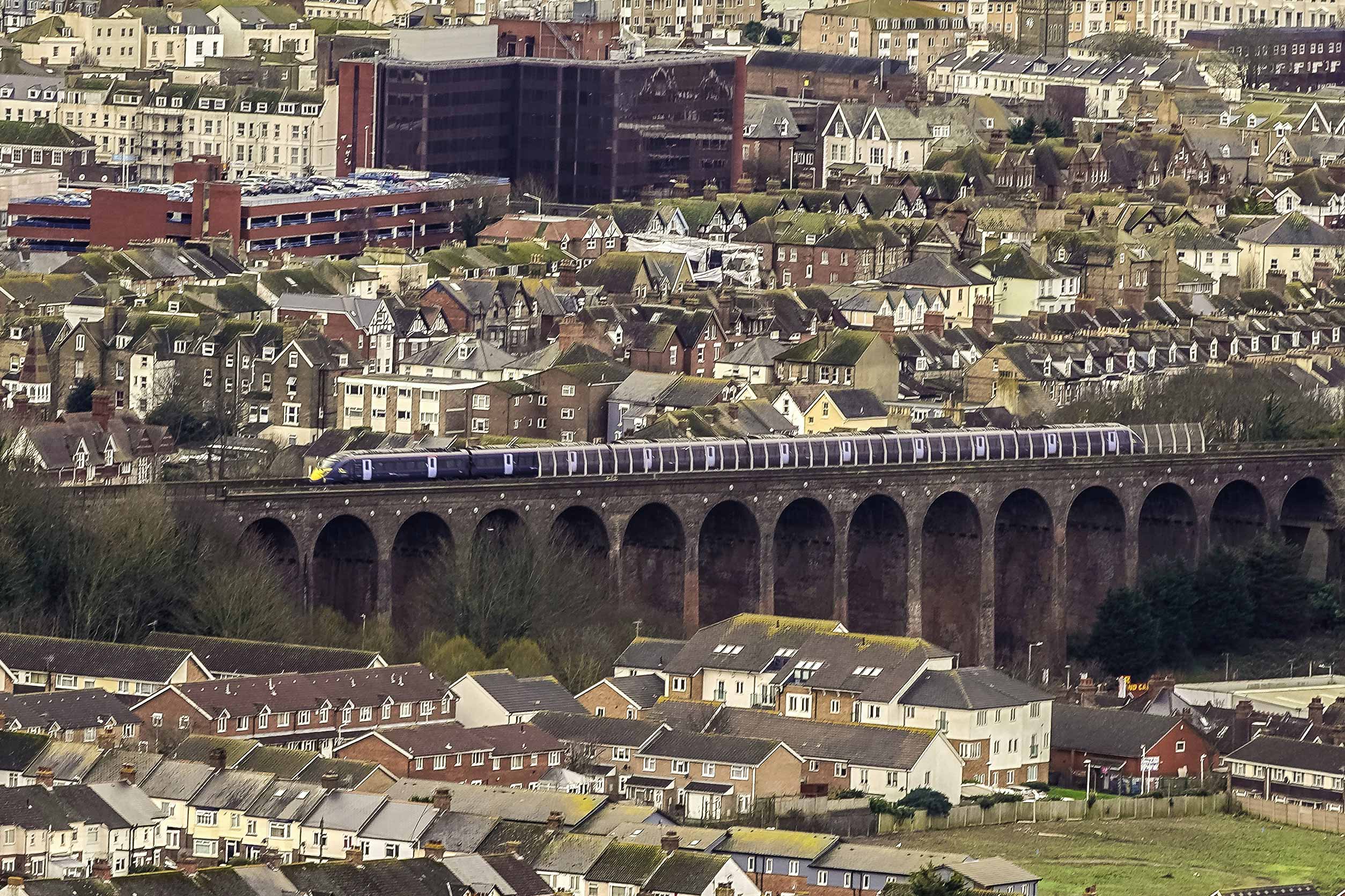 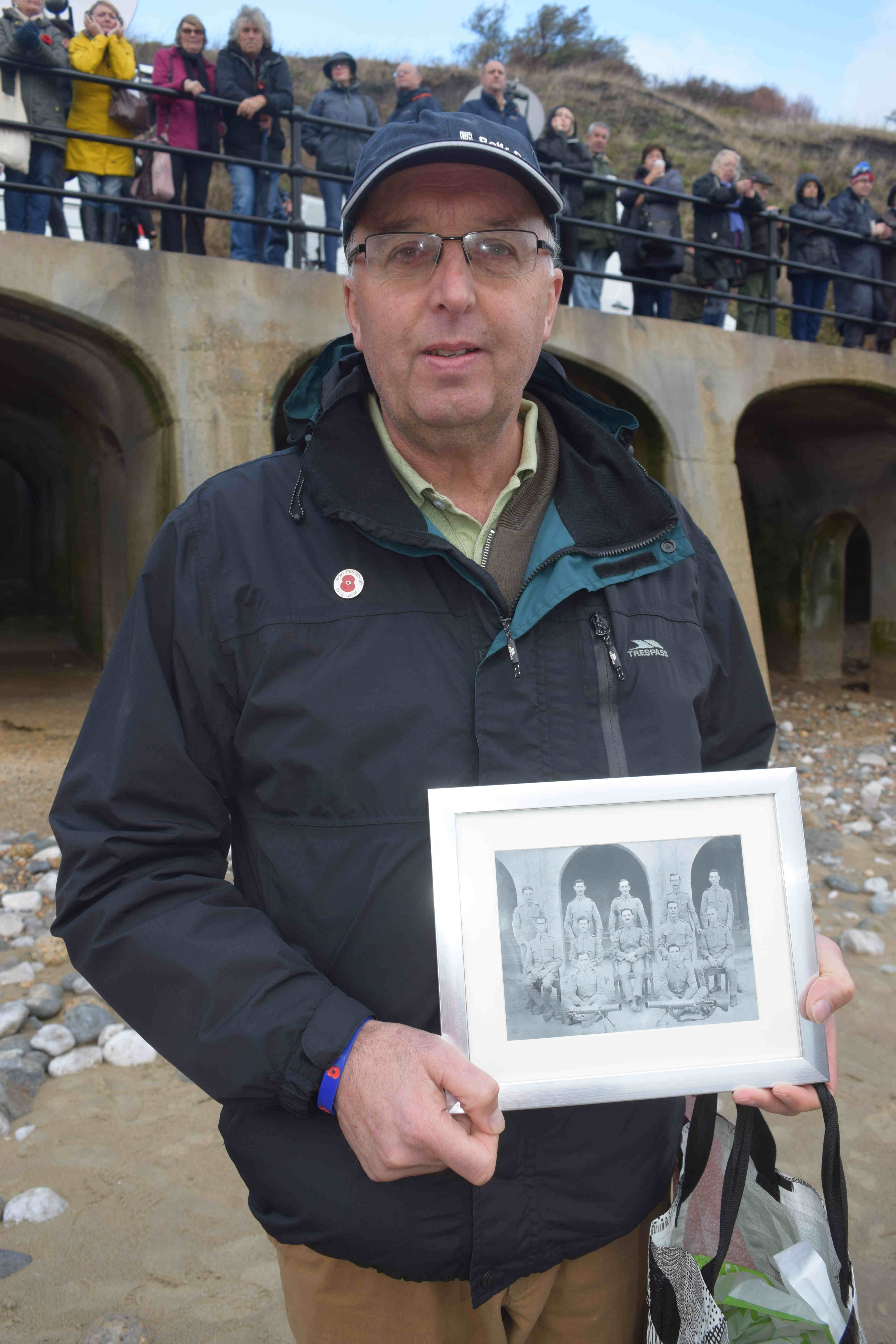 Local Royal Mail mechanic David Rumbold had brought along a picture of his grandfather, Edward Charles Rumbold. He, along with his friends, had been photographed in Folkestone just before they left for the war. David wanted to show this picture to anyone interested, highlighting the fact that all the soldiers that left were part of a family, and had local connections to somewhere in the country. David talked about his grandfather: “I knew him; I can remember sitting on his lap when I was 6 and going through books together, but he spoke nothing of the war. My dad didn’t say much about it either. It’s clear they didn’t know what they were going out to, and it was a huge shock to them”.

“I’ve just done a tour of Northern France, all the WW1 related battlefields and such. You get a real insight of what they went through and it was horrific”.

Children, parents and grandparents came together to witness this event. Donna McLean, along with her family, wanted to see the face of Wilfred Owen and to listen to the poem by Carol Ann Duffy.  This was specially commissioned for people to read and say at these events across the country. “I’ve brought my children too because it’s important for them not to forget what this is all about. It was 100 years ago, but war hasn’t stopped. The poem is very poignant”.

Donna speaks with her thick Scottish accent and shares that Walter Tull’s image – the first black British officer, whose parents lived in Folkestone, is being drawn on her home beach of Ayr. Walter’s brother, Edward, was adopted by a dentist in Ayreshire and Walter spent holidays there as a child. Edward went on to become the first Black registered dentist in the UK.

The tide had turned and was heading in back towards the arches of Coronation Parade. People were still walking down from the East Cliff to get closer to the image of Wilfred Owen. At 10:20am the tide had reached the side of his face, and started to wash away the image from the sand. At 11am, with no call for quiet, no chime of any clock, the community fell silent to remember those who have fallen in wars. The tide washed the last of Wilfred Owen’s image out to sea. A respectful applause rose from the arches as everyone showed their appreciation, not only for the creativity of the commemoration, but of all the lives that have been lost.

We will remember them.

The Wound In Time by Carol Ann Duffy

It is the wound in Time. The century’s tides,
chanting their bitter psalms, cannot heal it.
Not the war to end all wars; death’s birthing place;
the earth nursing its ticking metal eggs, hatching
new carnage. But how could you know, brave
as belief as you boarded the boats, singing?
The end of God in the poisonous, shrapneled air.
Poetry gargling its own blood. We sense it was love
you gave your world for; the town squares silent,
awaiting their cenotaphs. What happened next?
War. And after that? War. And now? War. War.
History might as well be water, chastising this shore;
for we learn nothing from your endless sacrifice.
Your faces drowning in the pages of the sea.