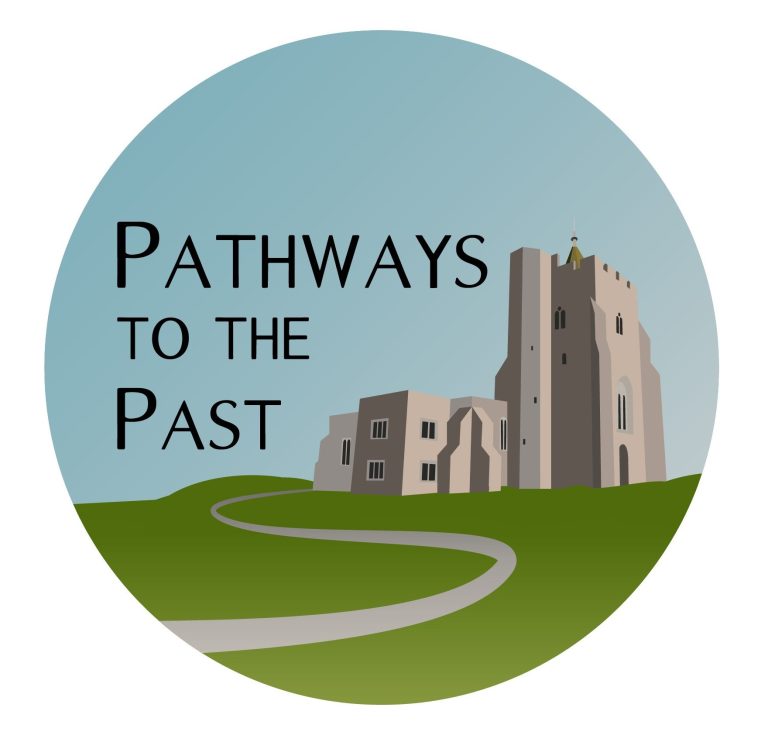 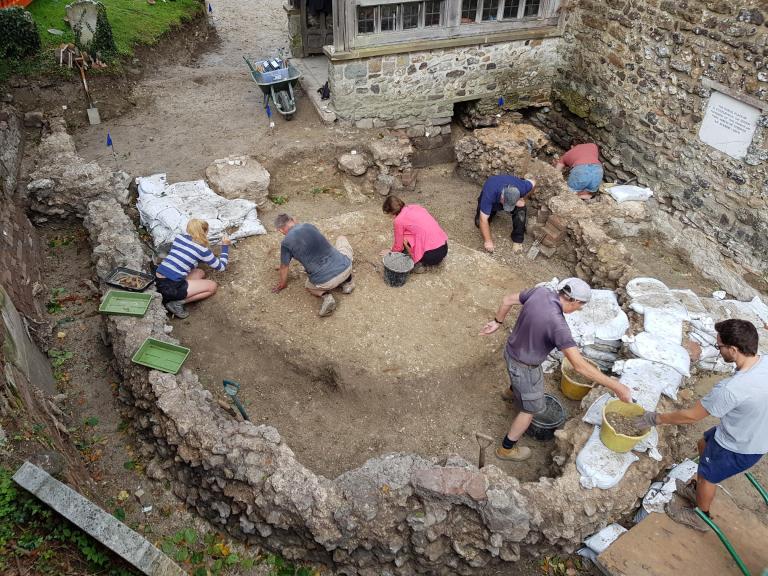 St Ethelburga in Lyminge is causing a stir.  She was the daughter of the King of Kent, King Ethelbert, in the 7th Century AD.  She made a stir then, and is still managing to make her mark!  Lyminge is a little village about 10 minutes’ drive into the Downs behind Folkestone, and Folkelife went along to see what all the fuss has been about.

In 640 AD, there was a hive of activity on the hill and into the valley by the Nailbourne River.  St Ethelburga had founded a church and monastery to practice the newly established Christian religion.  The Charter of Lyminge, from 697 AD – one of the oldest charters in England, stated that there was a Basilica on this site, and many people since have created plans of just how big that could have been.

The Pathways To The Past project has set out to discover the early remains of the settlement in Lyminge and has found some interesting archaeology.  Whilst standing on a walkway over the site, Rob Baldwin, the project manager, explained: “The Rector of Lyminge, the Reverend Jenkins, was a keen archaeologist, and in the 1850s he started to dig around this area where we are now.  He found the remains of a 7th Century church and made a plan of how big he thought it would be.  He knew there was a Basilica here, and he invented a three apsed church that would have stretched from the side of the existing parish church, off into the graveyards behind us.”

1400 years of christianity in folkestone

“We’ve also found remnants of plaster, some white in colour and some pinky/red.  You can imagine the inside of the church looking rather brilliant being lit by candlelight; a beacon if you like!” 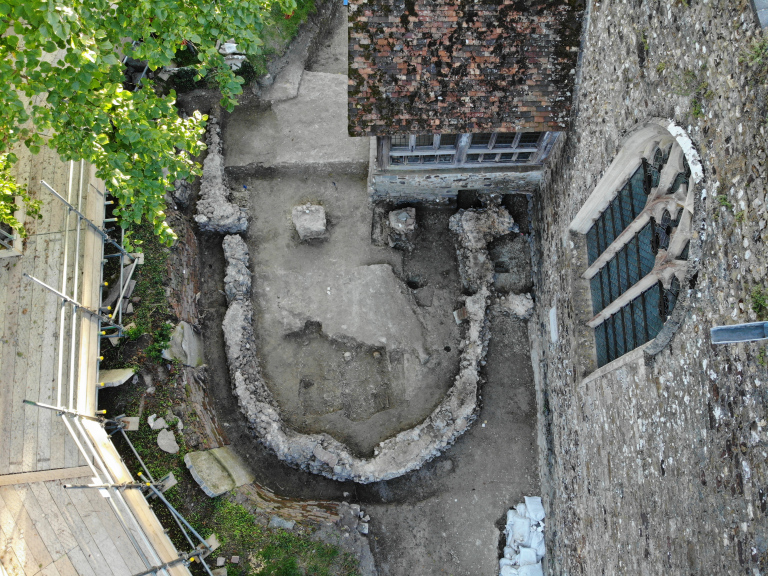 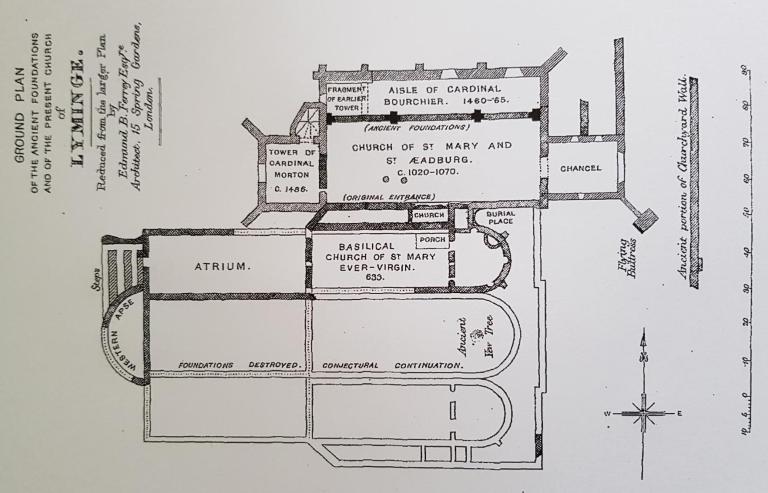 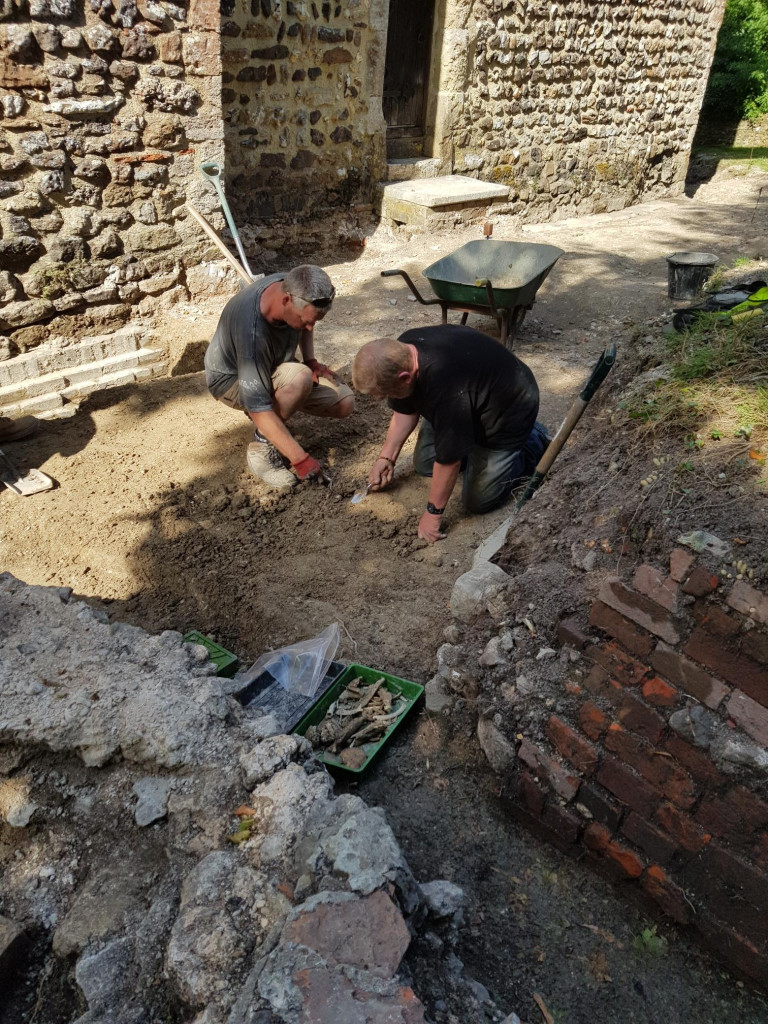 pathways to the past

The Pathways To The Past project has a number of aims.  Lyminge church does not have any disabled access, and so funding has been awarded from the Roger De Haan Charitable Trust, the National Lottery Heritage Fund and other local trusts, to enable the archaeological dig to be done before 21st Century disabled access is created to make this church more accessible.  The team knew they were going to find some archaeology, thanks to the Rector of the 1850s.  However, to share this with the public, once the archaeology is covered again, there will be a 3D imaging exhibition available inside St Ethelburga’s and also online for everyone to see.

Gabor Thomas, the archaeologist in charge of the site, has been digging in this area for a number of years.  He’s found evidence of settlements at the top of the hill, and through the graveyard to the site where the 7th Century remains have been found.  He’s been able to piece together a much better picture than the one painted by the Reverend Jenkins in the 1850s.

a complex of religious structures

“However, what we do have is substantial foundations for another building, on a similar alignment.  It is a small, but significant piece of evidence showing us there were other buildings on the same site, and with the same alignment, at later dates.  This is very distinctive for Anglo Saxon England.  You can see this with the example in Canterbury at St Augustine’s Abbey; there are three churches in alignment there, and we also see this elsewhere.

“It creates a complex of buildings, and thus leads us, along with the other archaeology we’ve found over this church, its graveyard and the field beyond, to think that this is a hub of activity for early Christians.  It’s being constructed because of the early Church; it’s a place of genealogy, of dynasty that’s being returned to again and again, generation after generation.  We can see a place of dynastic power, dating from 1400 years ago, all in Lyminge!”

The team of volunteers have worked hard to get the news of the discoveries across, getting coverage in local and national news.  The BBC, The Times, and the Daily Mail to name just a few.

The site was worked on in August 2019 and was then covered to avoid the foundations drying out.  There will be indications on the ground where the foundations are, and a 3D exhibition of the archaeology will be available in St Ethelburga’s and online once the project is finished.