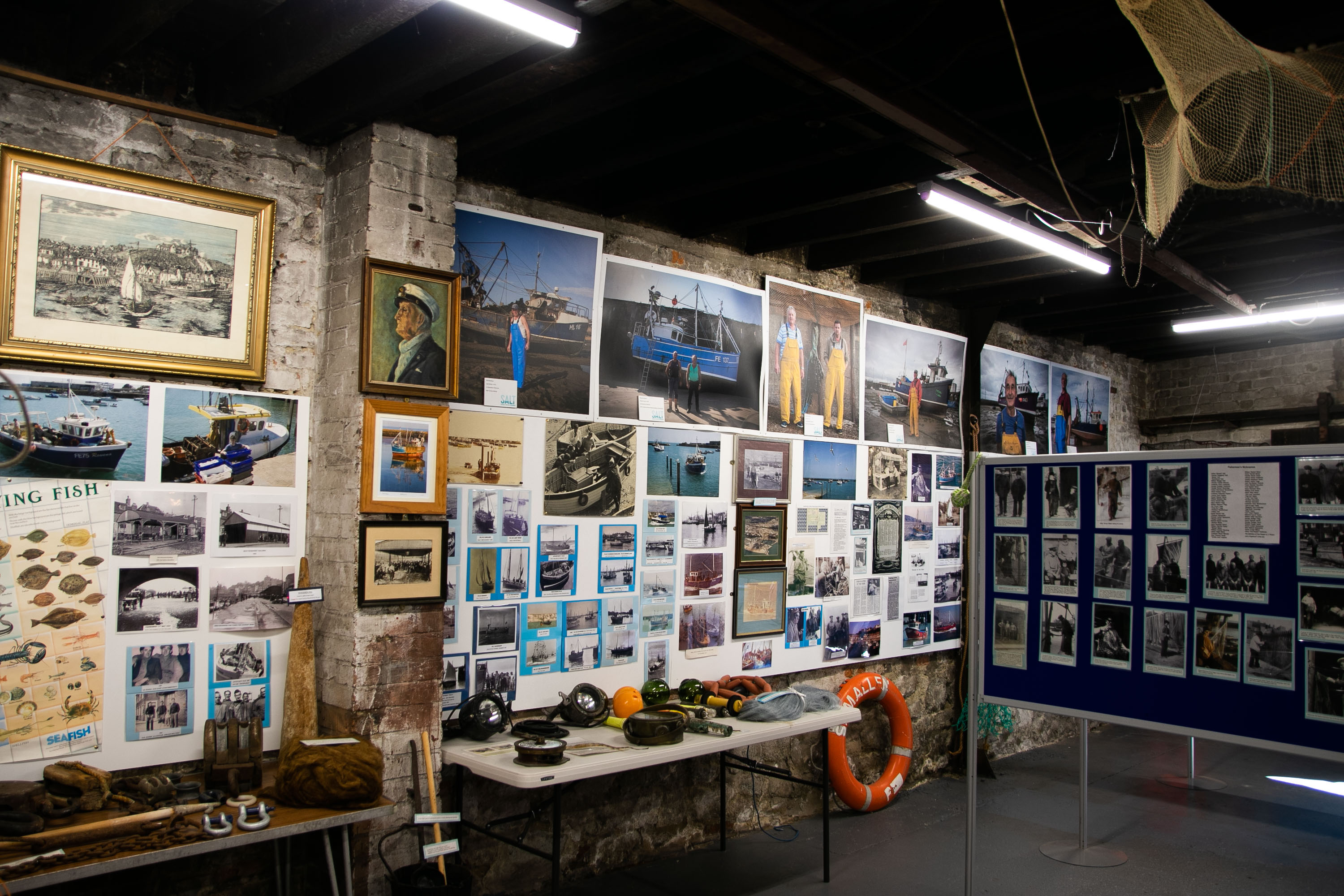 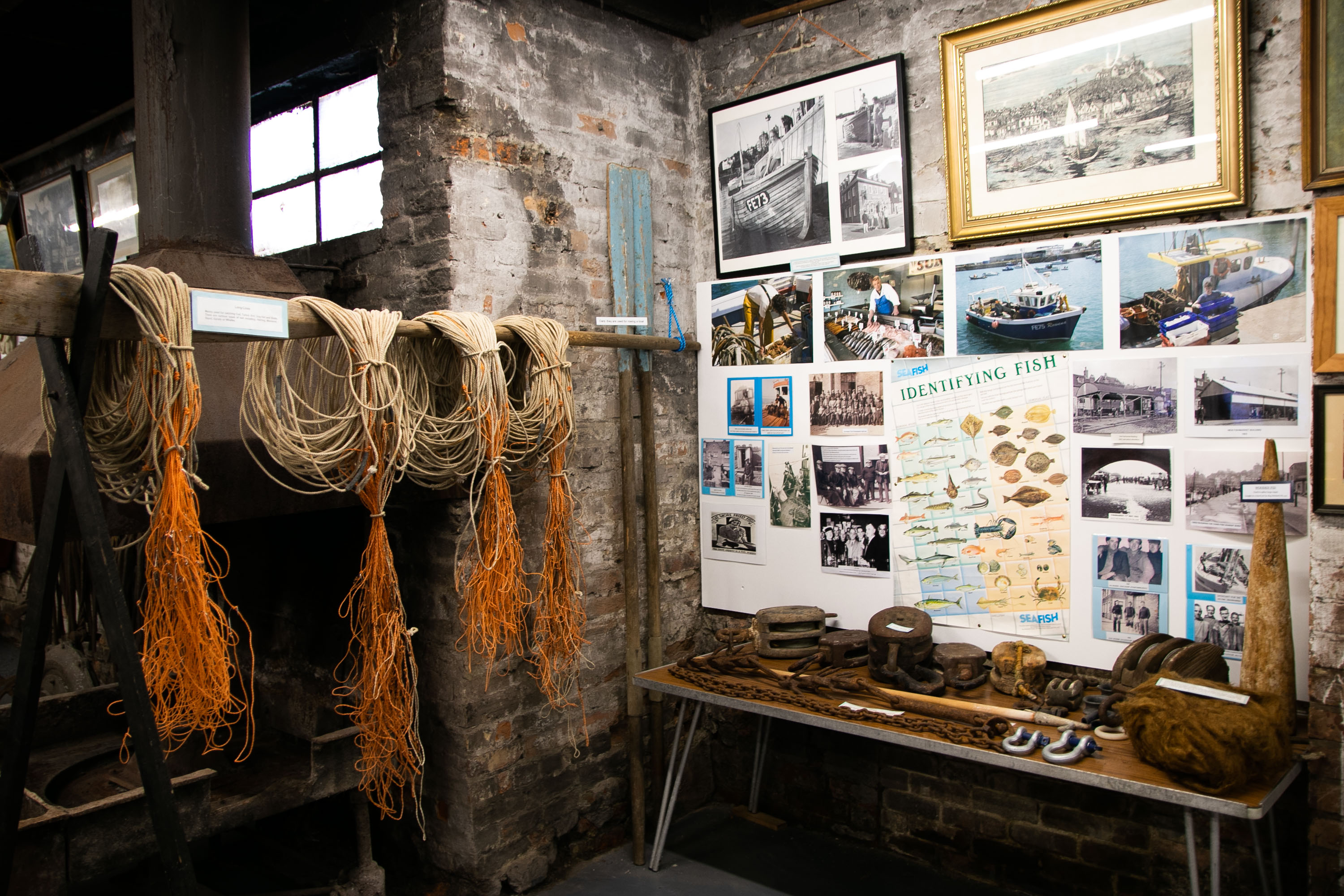 The Folkestone Fishing Museum is nestled under the arches on The Stade opposite Rocksalt.  It tells the many stories of families and fishing that were the mainstay of Folkestone for hundreds of years.  It’s run by a small group of retired fishermen who can trace their ancestry back through generations of fishermen working out of the harbour just across from the museum’s entrance.   Folkelife went to meet Alan Fredric Taylor and Francis Howard Bond, two of the volunteer curators of the Folkestone Fishing Museum.

Alan Taylor is the Chairman of the museum and had been wanting to become a fisherman since the age of 9, “My father always had boats for pleasure, and I used to come down here, to the Harbour, every evening after school.  I went out fishing regularly with a rod and line.  I wanted to become a commercial fisherman after school but my father said I had to learn a trade.”

“My ambition was to have been a shipwright, but there was only one family business in Folkestone and they weren’t taking on any apprentices.  Other people went to Rye, Hastings, Dover or Whitstable.  However, because no one had transport, I went on the building site instead.  I left school in 1952 you see.  Fishing was a part-time occupation for me.  I would take my rowing boat out, and my lobster pots, and row to Sandgate.  I’d do this with my friend, the late John Brickell, who used to run The Rock Shop in Folkestone.  We’d row back and be at work by 7.30 in the morning!”

Alan worked for 14 years as a part-time fisherman, and then for 5 years as a full-time commercial fisherman taking out long lines in the winter, and fishing for cod and the like, and taking the Miss Folkestone out during the summer months with visitors wanting trips on the sea.

“The mittens you see behind me were mine; I had to hold an iron tiller to steer the boat.  I haven’t worn those mittens since 1970.  The sleeping partners who owned the boat with me decided they weren’t making enough money from the boat, and it needed repairs too, so we sold up and I went to work for Sealink for 22 years as a ship’s carpenter.” 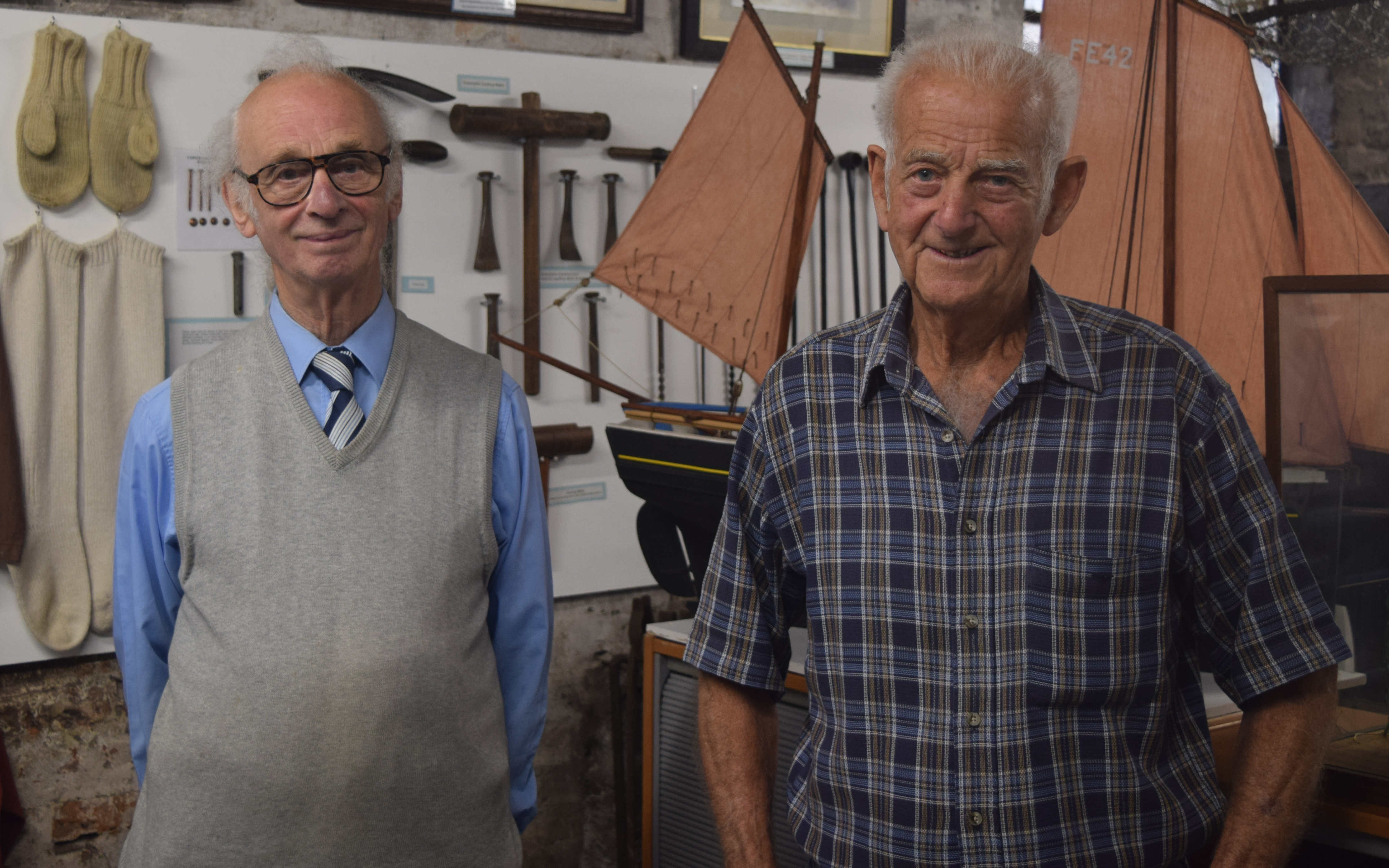 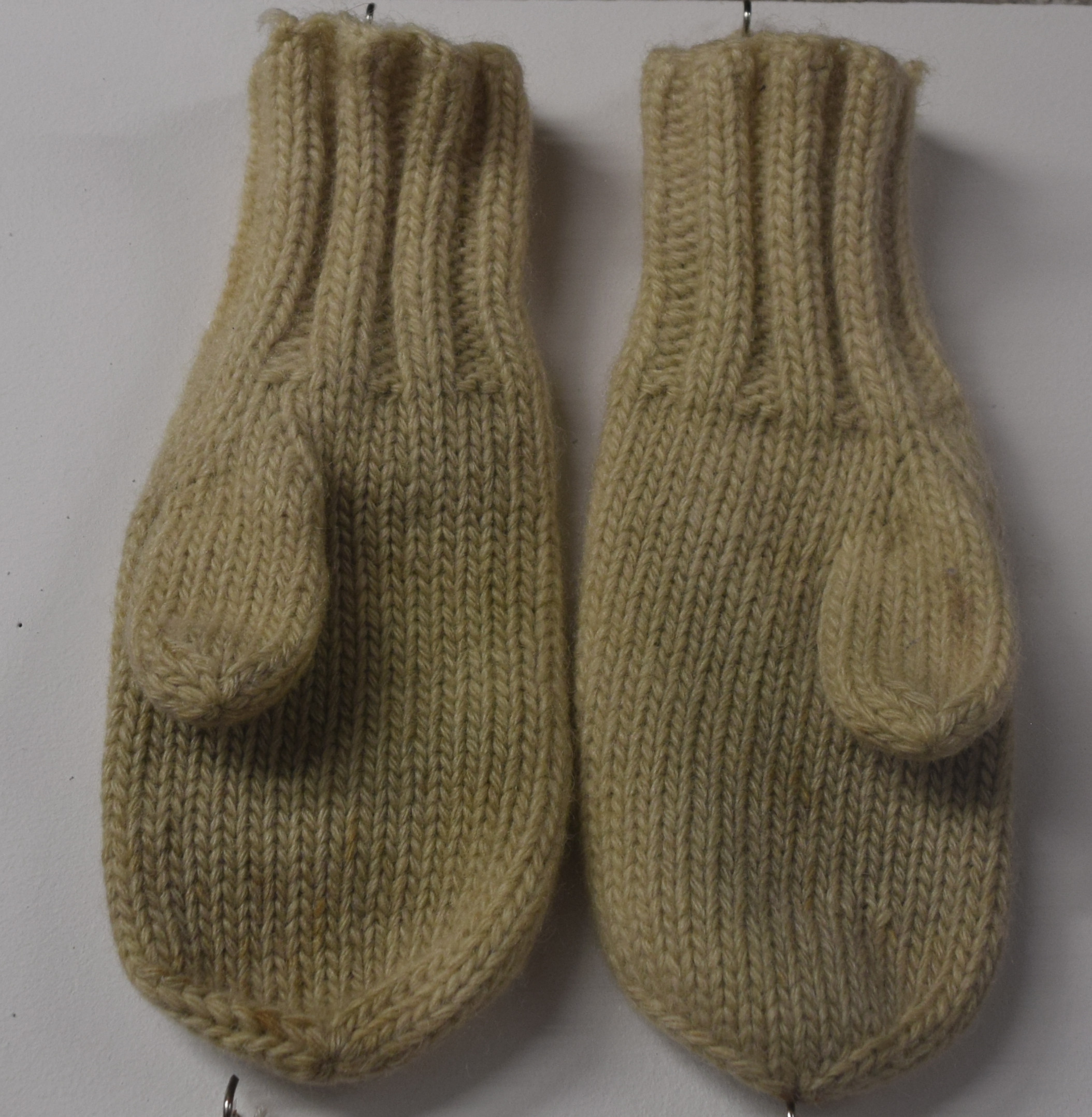 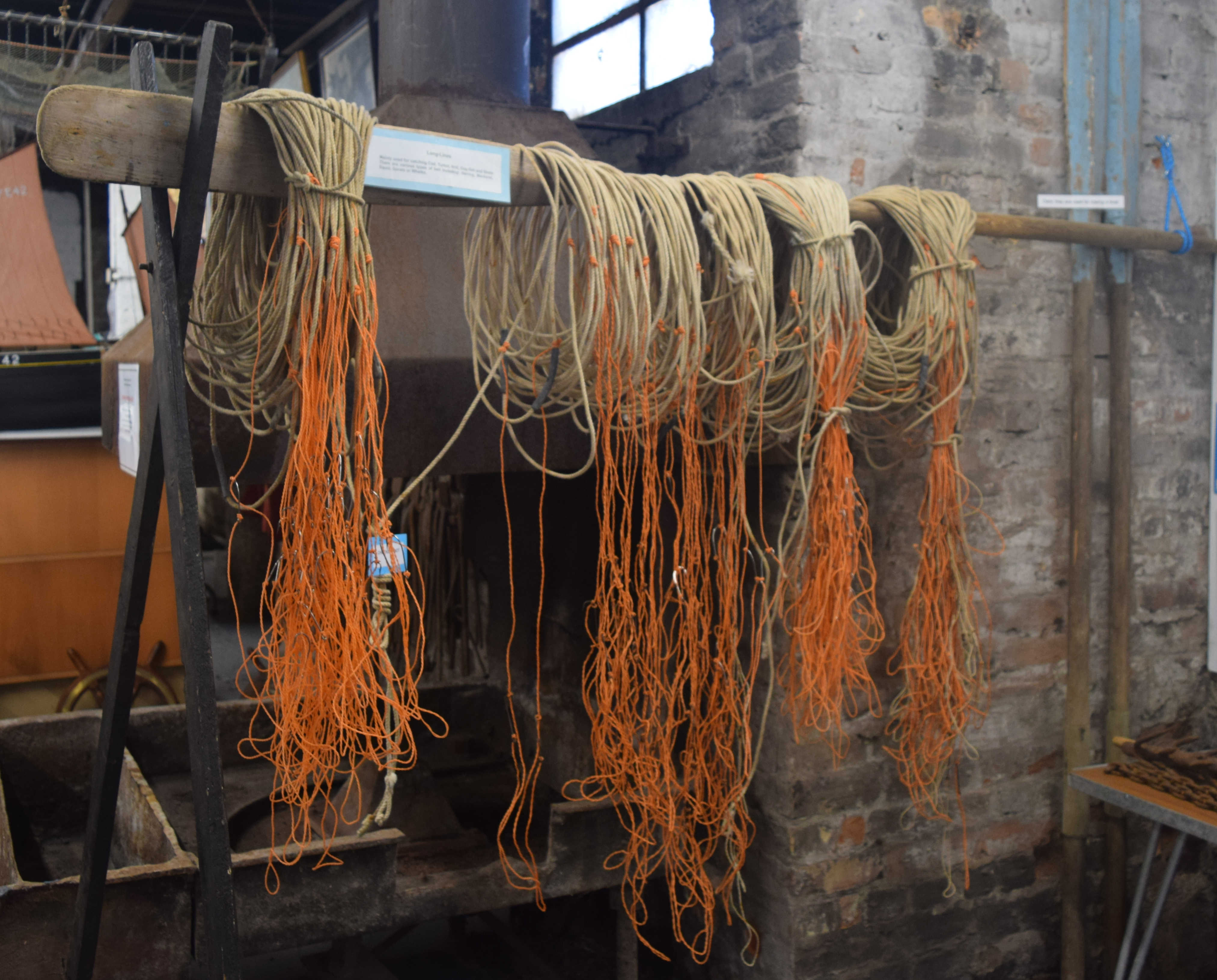 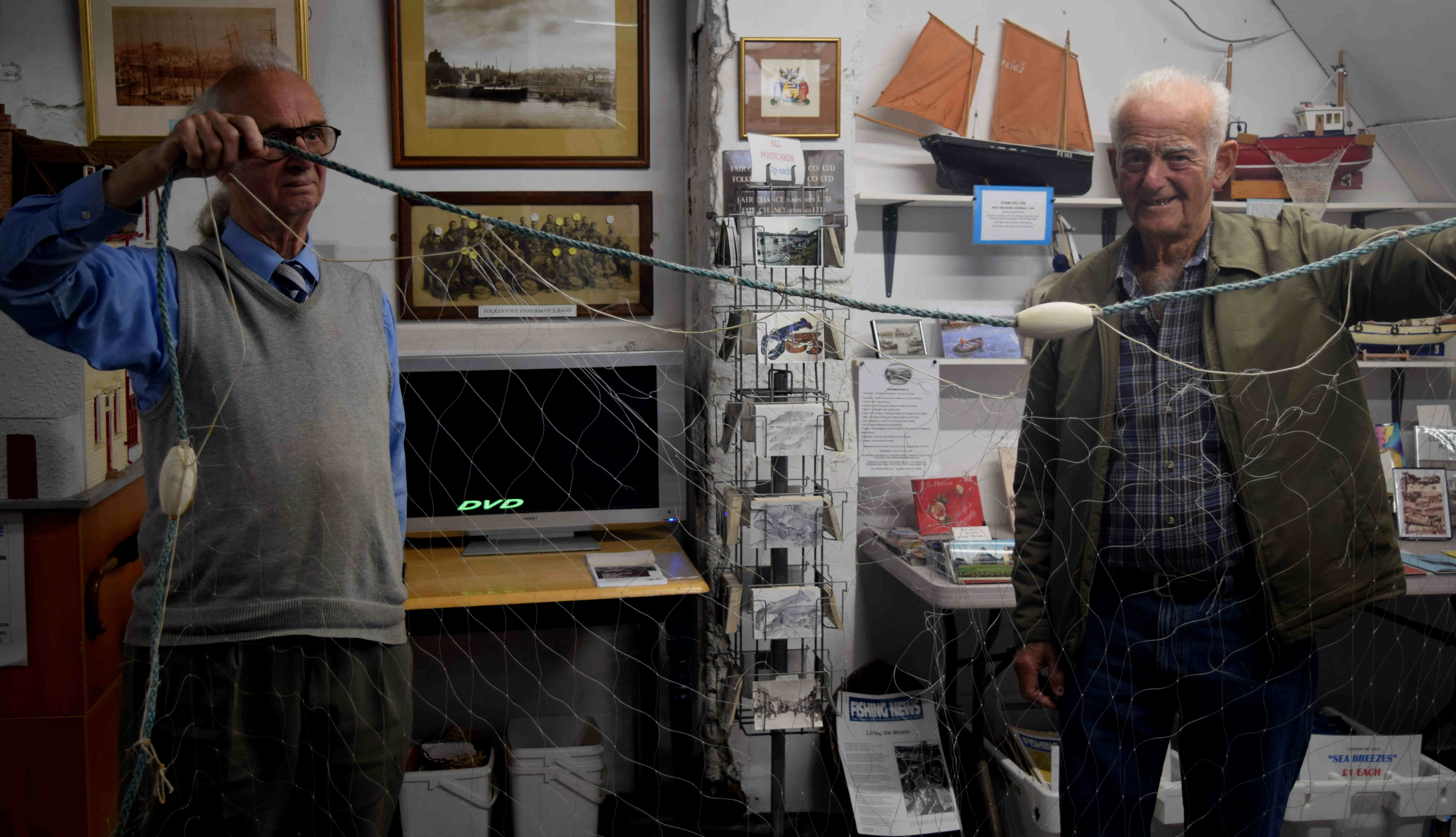 The museum has tools and artefacts from Folkestone’s long fishing history.  Other members of the volunteer team have donated family belongings that are on show.  You can see the difference in fishing lines that highlight how much the industry has changed.

In Alan’s time, he would go out with a Long Line and catch cod.  This line would be baited before leaving shore, and would have up to 80 hooks on it.  You could have up to 4 people in the boat, all looking after 2 long lines each. You’d need two people to haul the line back in, but as Alan says “The only cod you’d catch would be healthy cod who were wanting to eat.  You wouldn’t fill up all 80 hooks, and you’d have to come in after you’d brought the lines up in order to rebait them.   We only caught what we needed, and only the healthy fish.  It was very labour intensive though.  So they brought in different nets.”

The changing face of fishing

“These are gill nets.”  Alan and Francis hold up a big net curtain with weights on the end for me to see.  “The fish swim along and when they hit something, they instinctively turn.  So they turn and twist themselves into this net and can’t get out.  It’s like a curtain across the sea and gets everything that’s coming through – healthy or not!  You can see why they catch more fish than they need, and also fish other than cod too.”

“When the net breaks, it costs too much to fix it, so it usually gets dropped into the sea bed and it stays there.  However, the fish can still get caught up in it, so it’s not the best option, in my opinion.”  Both Alan and Frances agree.

The Folkestone Fishing Museum has many photographs which all tell stories of the lives of those who used to work out of Folkestone Harbour.  There are some characters too.  “Here’s Teddy Fagg at the fish auction.  There’s the slab with flounders, dabs and plaice on.  There’s Mrs Waller, Skinny Harris and Bill Grayling, the fish auctioneer.   There are so many stories we could tell, Mrs Waller was a very distinctive character – to say the least!  She was in direct competition with her son who’s in this photo here…”

The harbour was a strong working harbour, but there are issues with it;it needs to be dredged every 3 years in order for the bigger ships to be able to come along side.  Over the years, as the fishing industry has changed, this area has had to find a new purpose, whilst still supporting its roots.

The Folkestone Fishing Museum has a permanent home for the next 2 years in the old Ovenden’s Forge on The Stade, thanks to support from the Roger De Haan Charitable Trust.   You are in for a treat in discovering about the characters and heritage of Folkestone as a fishing town.  It’s open every day from 10.30am to 4pm, 2 Radnor Street, The Stade, Folkestone. 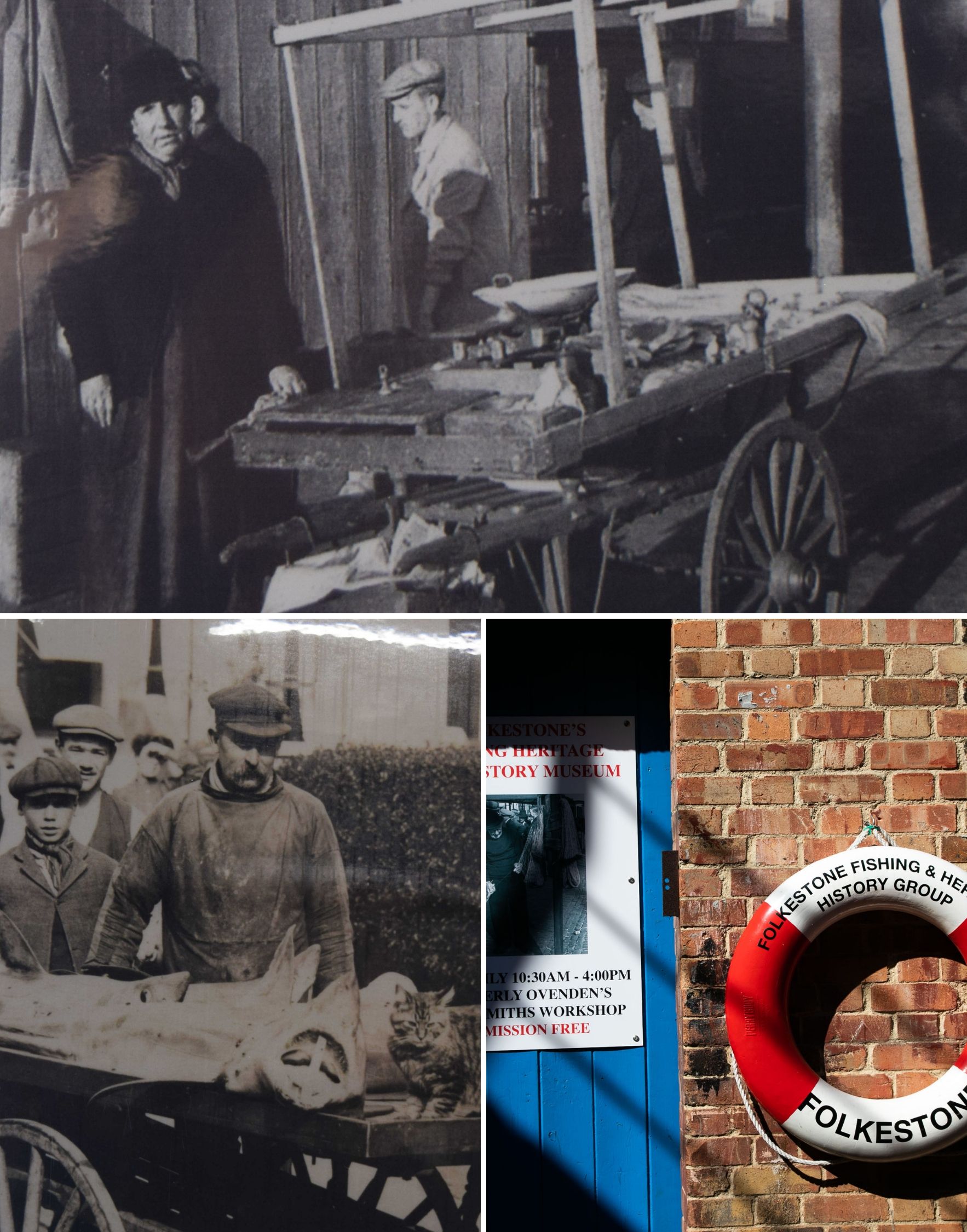