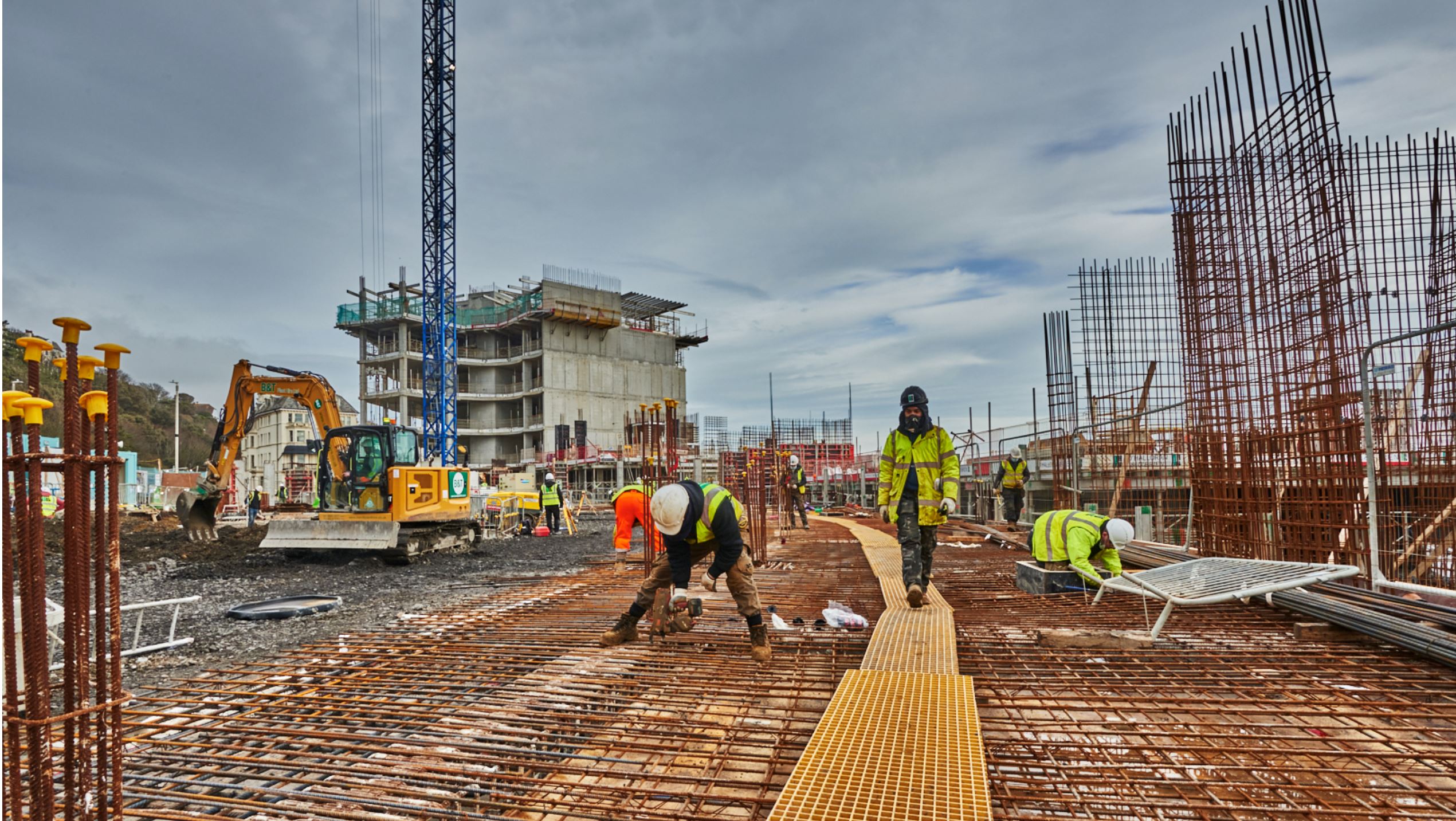 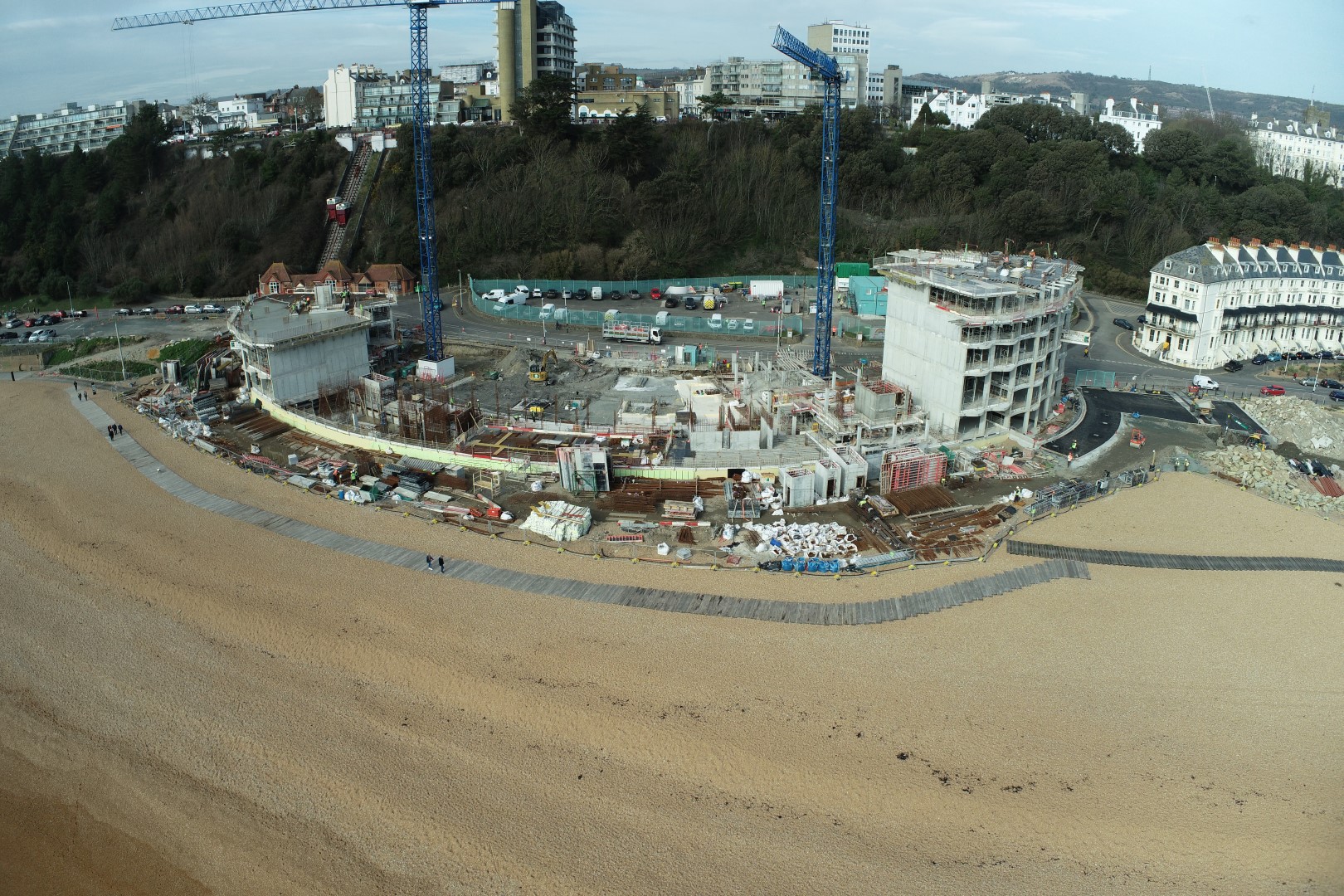 The Seafront Development – Building and Progress

The Folkestone Harbour & Seafront Development Company has been responsible for extensive renovations of the harbour area in Folkestone.  The Harbour Arm, open for trading since 2014 is one of the most popular tourist attractions in Kent. It’s a wonderful place for people to enjoy, and is an integral part of the long-term plan for residential and business premises in the harbour area.  The first residential building is now underway and Folkelife spoke to Chris Page, Project Manager from Jenner Contractors, about the build.

“This first phase of the overall masterplan of the development of Folkestone harbour and seafront creates 84 spectacular new homes.  Each home has glorious views over the English Channel.  Quality is at the forefront of our client’s focus. It is exciting to be part of the Jenner team delivering this bespoke landmark building in our hometown.

“The concrete frame is now in place and due to its location the structure needed to be designed and built to withstand the conditions around it.  It’s not only the weather that’s a consideration, but the sea-spray causes a lot of corrosion. It has a very high salt content. You only need look at any other building in the area and you will see the detrimental impact of the elements.  Our client was unequivocal in this regard. They did not want this happening to their building, and understandably so.  Our team has worked from the outset to identify and implement materials that can withstand these harsh conditions.”

“The standard lifespan you expect for any new building is usually 60 years before you may need to make any major alterations and repairs. With the Seafront Development, we have a requirement for an extended design life of 100 years. To achieve this within such a challenging environment we have gone beyond the usual requirements for a normal build.  For example, we’ve increased the the reinforcement to both the piled foundations and the concrete frame to give far greater protection from corrosion and ensure longevity for this structure.” 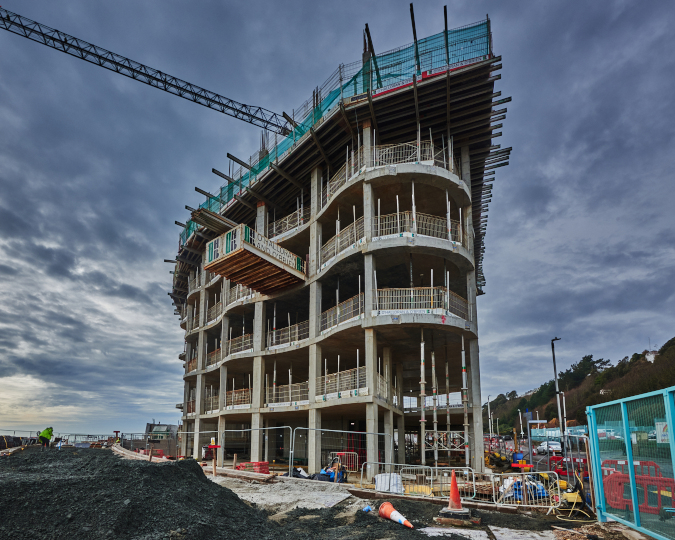 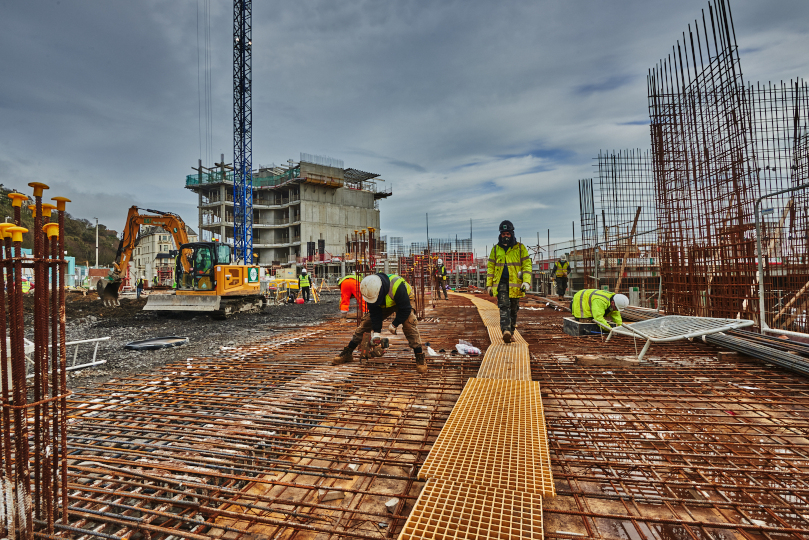 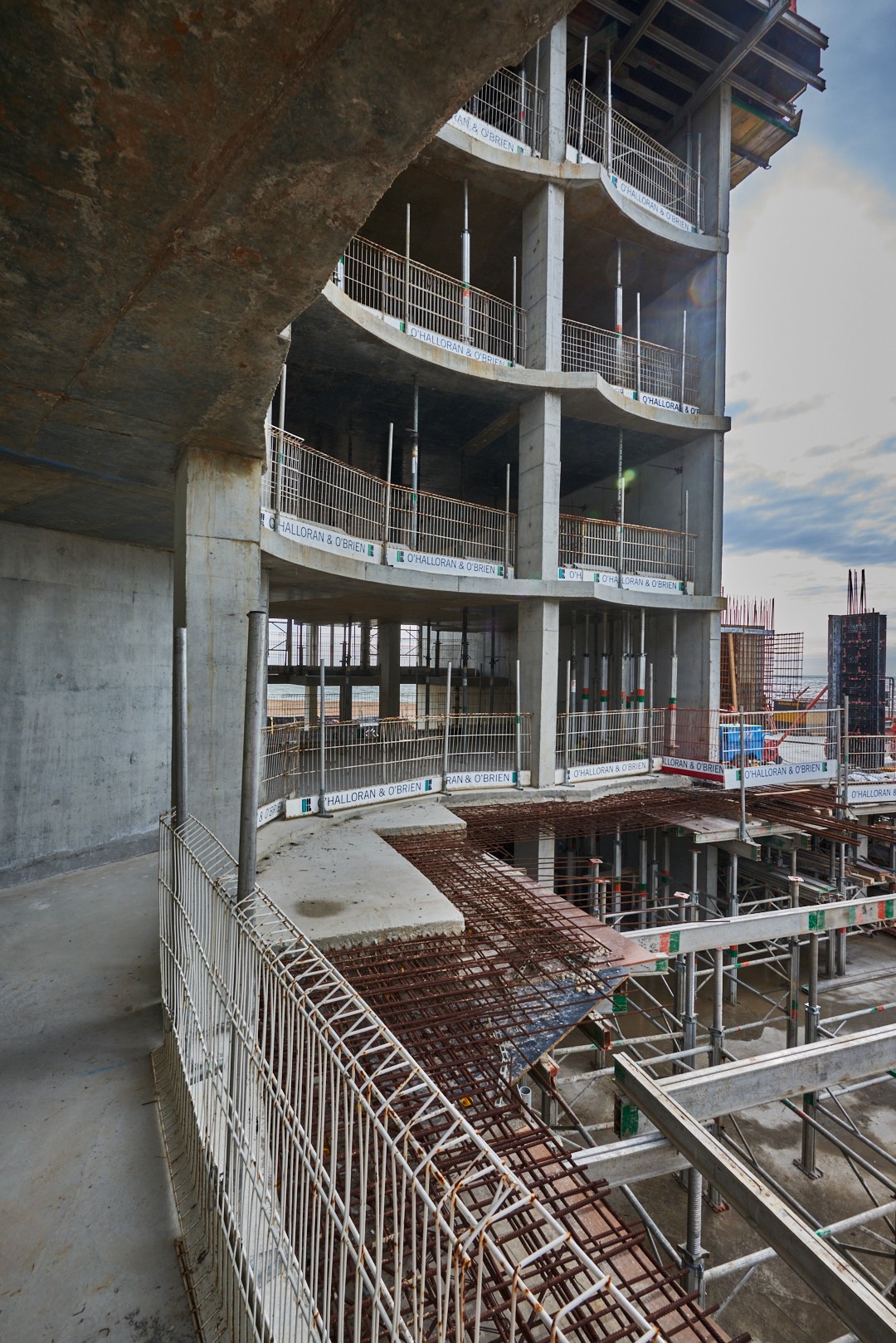 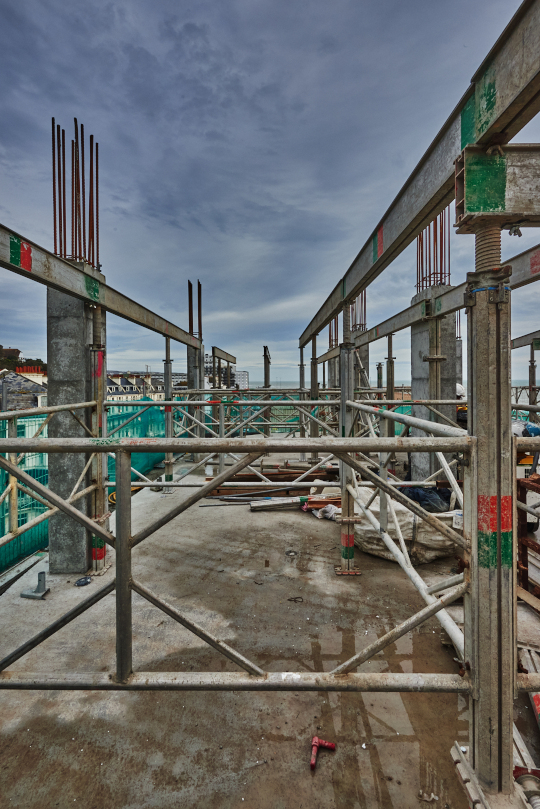 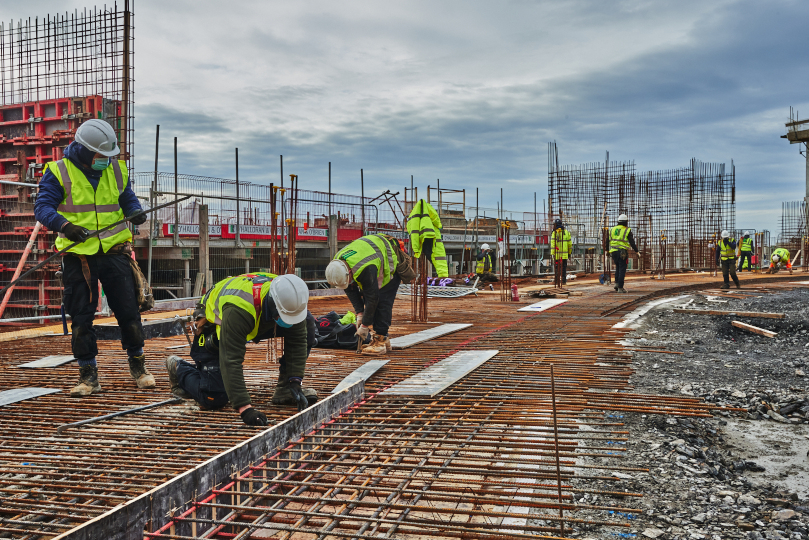 “Growing up locally on the outskirts of Folkestone I completed my apprenticeship attending South Kent College.  I trained as a Carpenter and Joiner and then progressed into site management.  On the weekends I would come down to the Rotunda amusements and the Sunday Market. I even had my stag do in the nightclub that was here, so I know the area and its heritage well.

“It’s difficult to picture what this area used to look like.  The remediation works, carried out by the Folkestone Harbour & Seafront Development Company (FHSDC), were done so well in transforming the area from what it was before.  This included creating the beach frontage that was in place before we started to build here, and replacing a mass of concrete slabs and tarmac. Geographically, we are now building on what was the former boating lake and a car park. During our excavations we had to remove quite a few obstructions which had been left below the surface. Interestingly, these included the base of the former boating lake and the foundations for some of the theme rides and attractions.”

“The foundations of the building go down to a substantial depth of 27 metres deep.  This means that the building is almost as deep as it is high.  In removing all the concrete and waste that was here before, we have piled into the natural strata and rocks. This has again given us more technical challenges to overcome within the ground during the earlier stages of the works.

“In addition to us building well above the water table where flooding risk is most prominent, there are a host of measures in place to further protect the area from flooding. Under the actual beach area, which is beyond the Boardwalk and closer to the sea, there is an enormous sand-filled ‘sock’ that sits 30 metres below the beach.  It is 30 metres deep and 6 metres wide.  This ‘sock’ is in place to reduce the likelihood of future flooding and was put there when the client (FHSDC) remodelled the beach, before the Boardwalk was installed.”

a building of the twenties

“This is definitely going to be a landmark building for the region; there’s nothing else like it.  I find it exciting, working to overcome the many challenges the bespoke nature of the building imposes. It is very conceptual; a modern building reflective of the 2020s.  And the lengths our client has gone to making this such a unique development is unlike any other developer I have known.  FHSDC has such an attention to detail and commitment to overall quality.

“There is an art to working with concrete framework construction.  We’re fortunate to have an excellent, skilled supply-chain working with us to fulfill our commitments and ensure we can continue to deliver. Keeping everyone safe in our duty of care to our entire workforce has been paramount. I am proud of the relentless commitment shown to this project during some very tough times.”

Chris Page works with a team of highly experienced and extremely knowledgeable people on the project. Folkelife spoke to their in-house Technical Manager Ben Thornby.  “All aspects of the build have been tested and subjected to thorough quality control.  We want to make sure it will last the lifetime of the building and outperform all other buildings in the local area.  The reinforced concrete is covered with a minimum 30mm layer of concrete to protect from any corrosion.  This is more than you would normally expect to see in a building such as this.  All the materials chosen on the external façade such as windows, balconies etc, are being made from non-ferrous materials so that they will not rust.  Any other materials that have the potential to corrode will have an enhanced level of protection.  We hopefully won’t see any unsightly staining.  It is this attention to quality throughout the build which determines the durability of the building.” 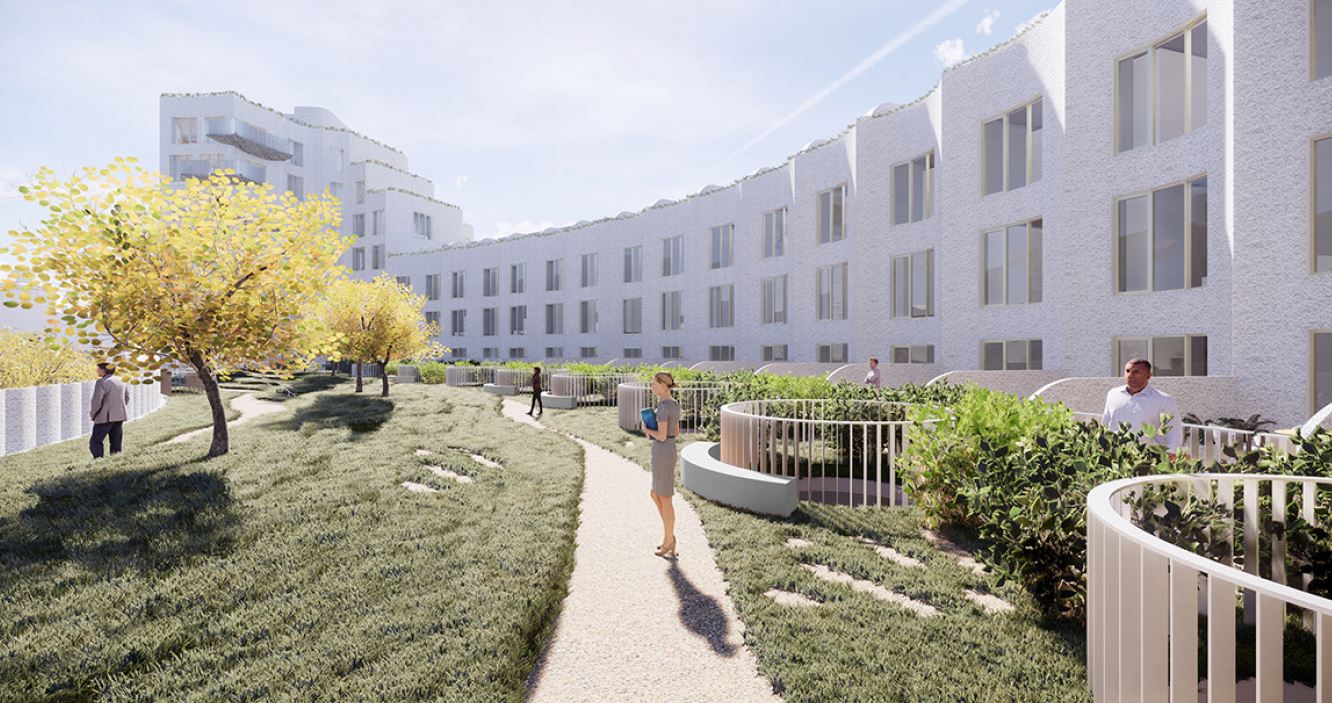 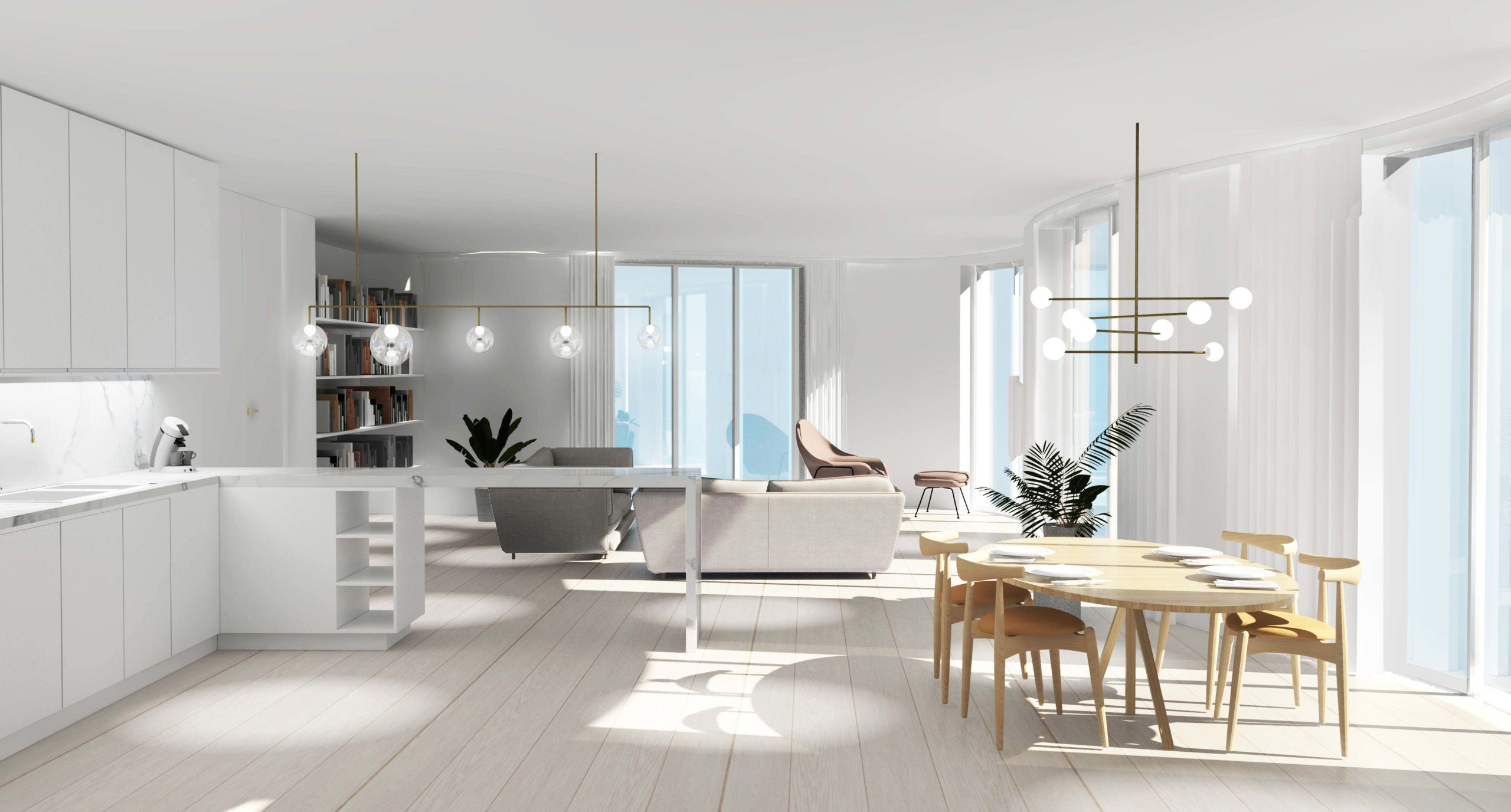 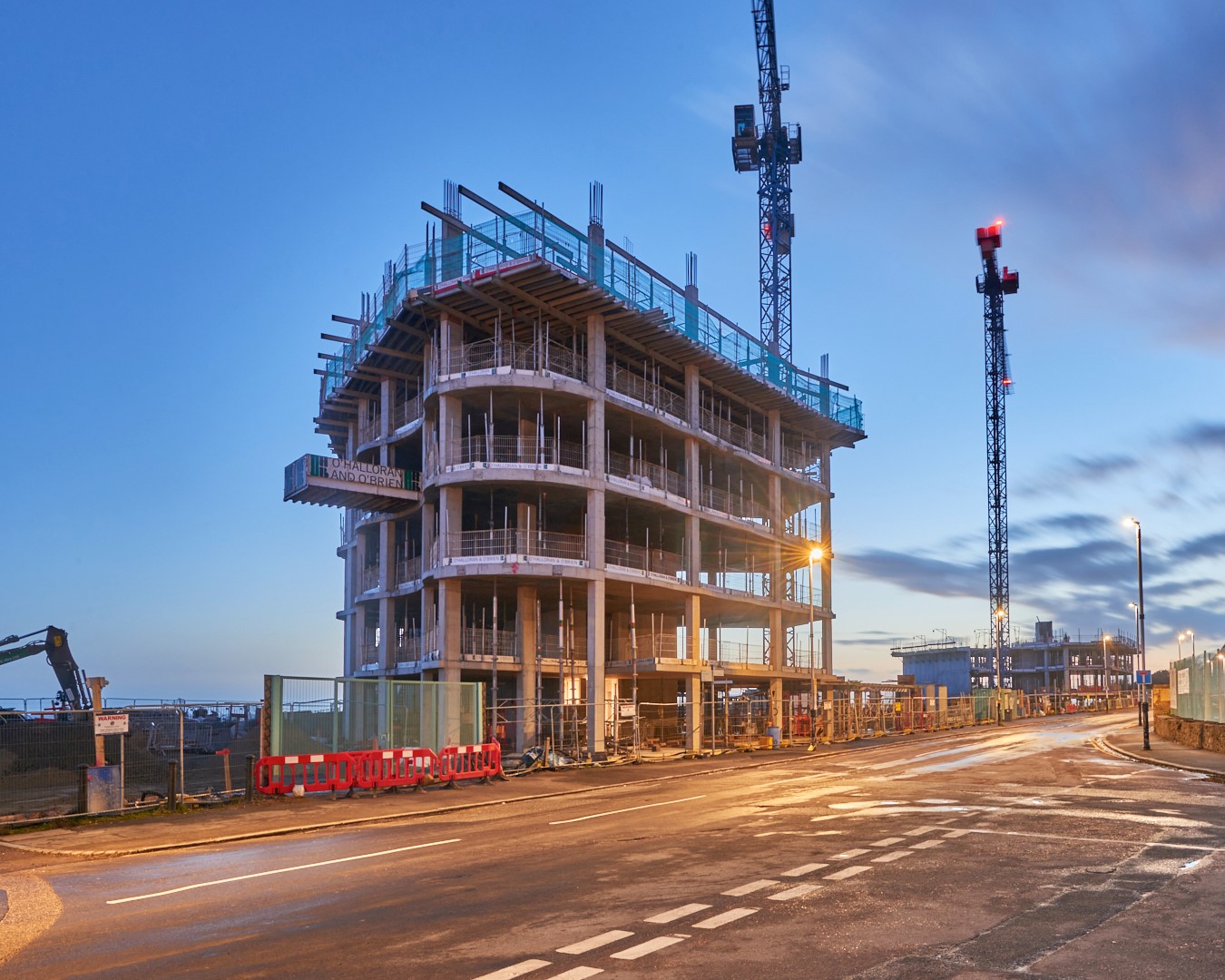 “All the windows will be, at minimum, double-glazed.  There will be areas of triple-glazing depending on their exposure. The building is heavily insulated to reduce effects of the cold.  In contrast there will be a special coating on the southerly windows to control the heat production from the sun. The building is technically challenging as, apart from the effects of the salt, and inclement weather, the sun can be your enemy as well as your friend!

“As you see more of the structure develop you can really start to envisage how the completed building will look.  On the top of the ‘bookends’ – the apartment blocks delivering 60 apartments in total at each end of the structure – there will be the penthouse terraces on the roof.  The central lower block is where the 20 town houses and 4 duplexes will be.  Each town house has access to a private roof terrace.”

“The design, by London-based Architects Acme, is certainly flamboyant.  They have maximised its surroundings, complimented the landscape, fulfilling the aspirations of the Folkestone Harbour & Seafront Development Company.  We’re creating a completely unique, bespoke landmark residential development right here in Folkestone. It is just what the town needs to continue its regeneration journey and I am proud to be part of this.”