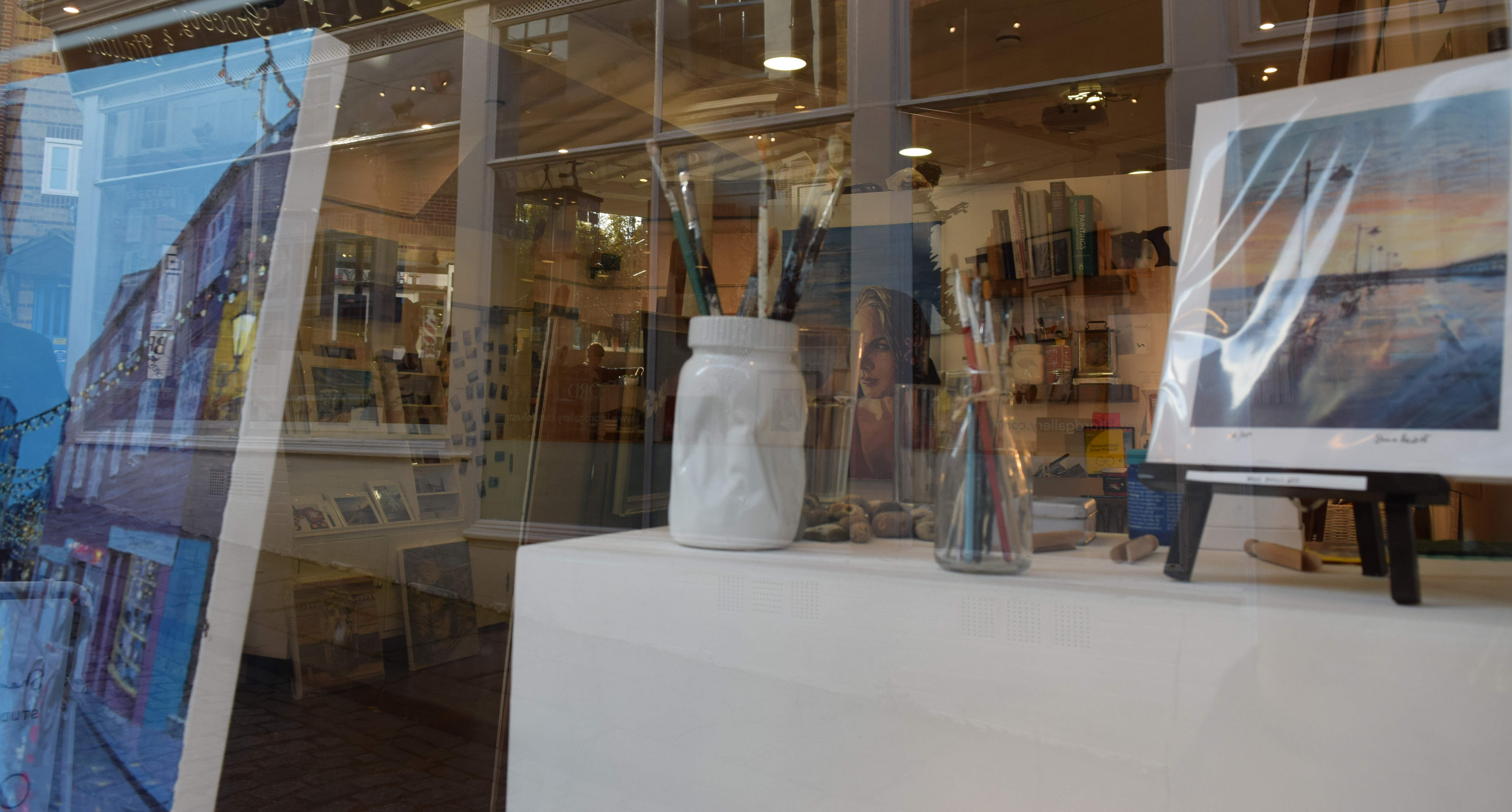 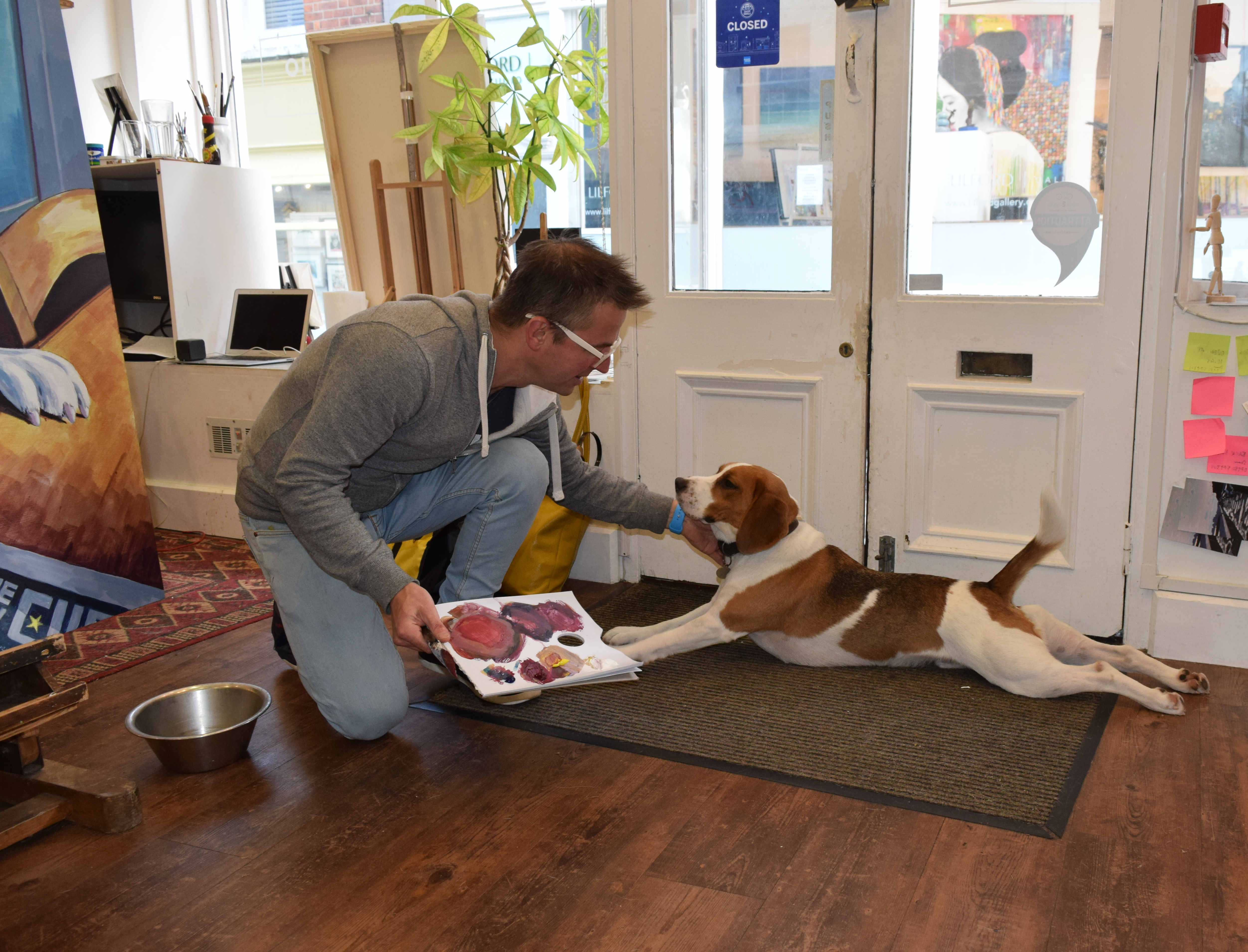 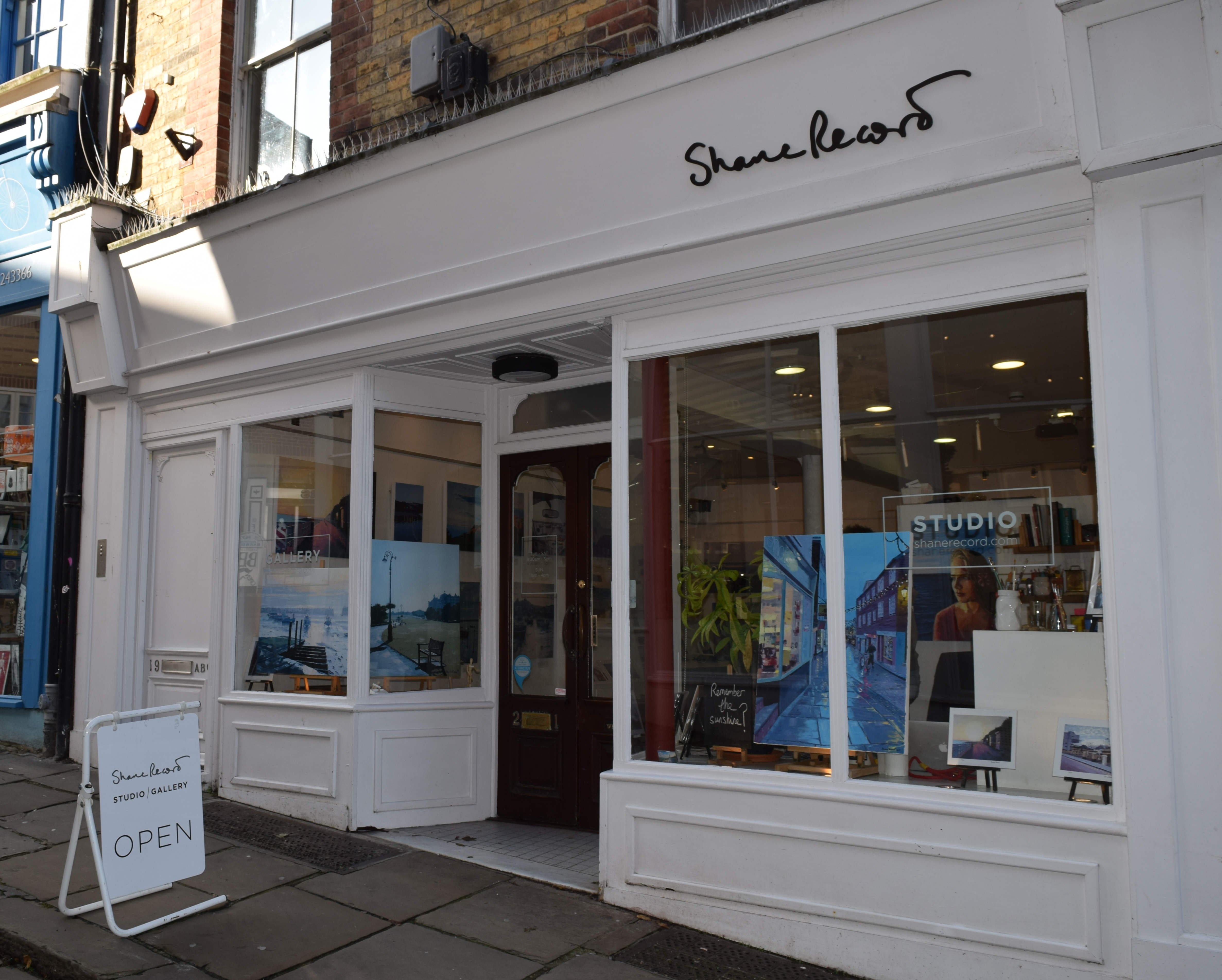 For The Record – Shane Record

Shane Record is Creative Folkestone’s longest-standing tenant.  He moved into The Old High Street in 2005 and has been painting in his gallery ever since.  Having always wanted to paint, he gave himself a year to prove he could really do it, and make a living from it.  Now, after 20 years of painting Folkestone, Folkelife went to see Shane, and his dog, Charlie.  We wanted to find out how Folkestone, and Shane, have changed over the years.

“I painted lots in that year, and people started to buy my work.  I guess it was inevitable that someone would notice what I was doing and get interested. That was when I decided to ditch the idea of getting any other job elsewhere and become a professional artist.  I found out what Creative Folkestone was doing in terms of renovating affordable working space for creative businesses.  My first place was half-way down The Old High Street, and I just painted and painted and painted.” 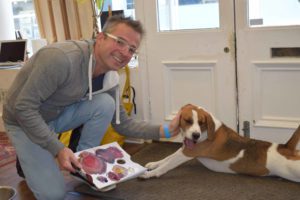 Shane was in his first studio for 2 years, and then moved to his current location at the top of The Old High Street in 2007.

“Back then, I was painting very fast.  I can still paint quickly, but my work was quite different due to the speed I was doing it at.  I didn’t really blend the colours and paints as I do now.  Also, I spend longer on drawing my subjects than I used to. I would also paint quite a lot of the Harbour area, and the red phone box on The Stade.  In fact, I was in danger of being known as ‘the phone box artist’ I did it so often!

“It was a very useful subject to me, but you’ve got to be careful!  If one of your subjects gets too popular you have to entice people with other things!  I managed to do that over time.  There were also a lot of The Old High Street too.  I suppose when I first became professional I thought ‘well, if people want a phone booth, I’ll do another one, but I’ll do it slightly differently…. and then I’ll do another one…!’  People would say though, ‘I want the same one as that one!’ So my paintings were quite similar.” 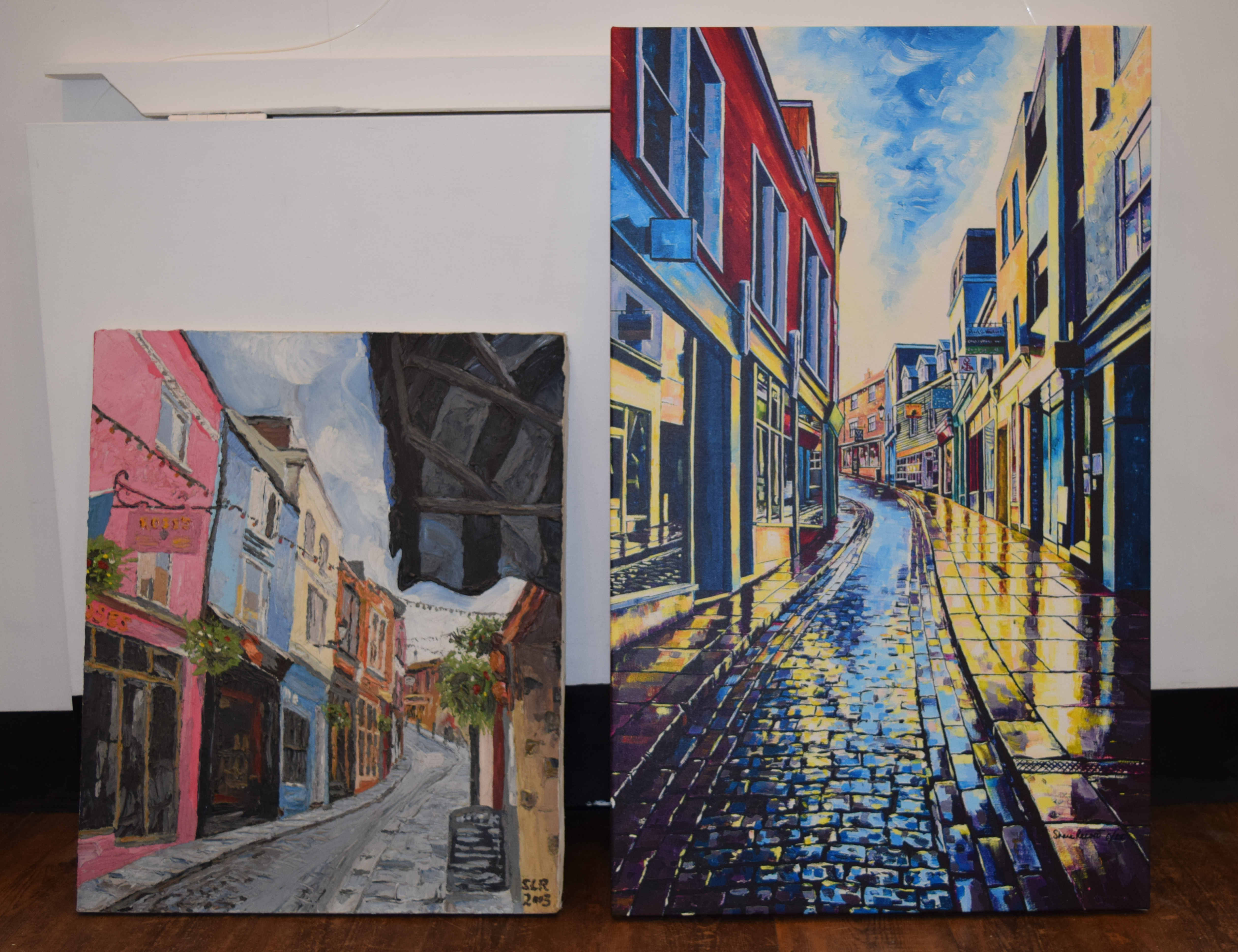 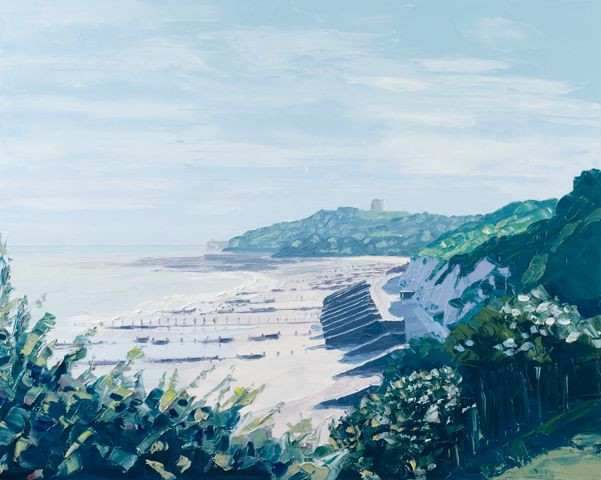 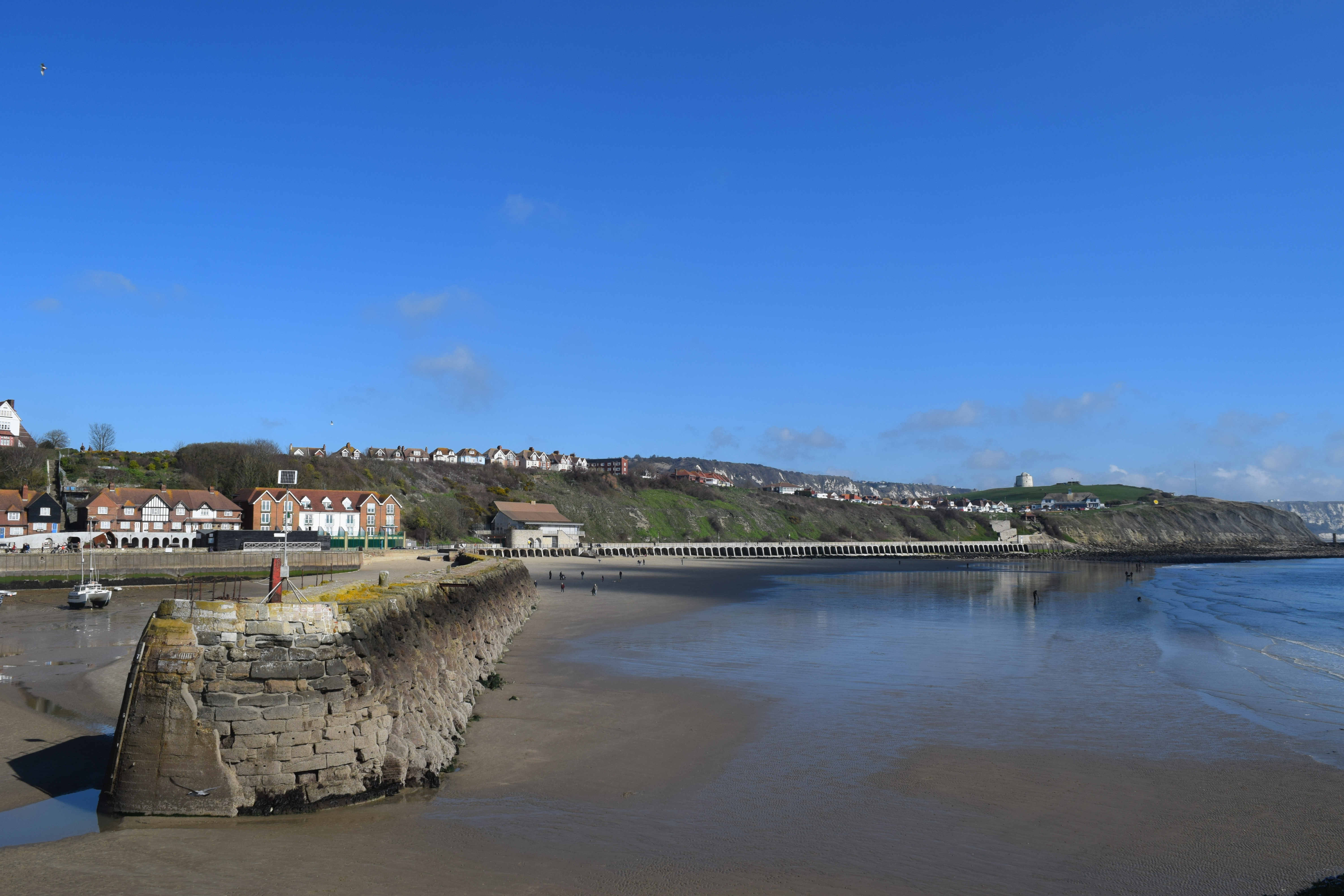 Shane Record has been painting Folkestone for over 20 years.  He’s just celebrated this with an exhibition at the Folkestone Museum.  When going through his paintings, deciding which to put on show, he found images that highlighted how Folkestone has changed over the years.

“Here are two paintings of The Old High Street.  In the first one you can see just how heavy-handed I was with the oils.  I hadn’t really learned how to apply the paint with the palette knife.  It’s very clumsy and rough in places.   It takes a long time to get the hang of it!   It’s extremely awkward to look at and it’s not a great painting.  But, my mum likes it, so it’s hers!

“The newer painting has so much flow to it.  I used a brush, which gives a different effect.  I wanted to make the street look golden. To make The Old High Street look like it was paved with gold!   This painting was done 18 years after the first one and you can see, you can learn a lot in that time!  My learning doesn’t stop though, the learning curve is as steep now as it was then!”

“I have always painted the town as it is.  I have never embellished it.  And, back then, it was downtrodden, but it still always had the charm. I think it was very gentle, but also very powerful.  I see now, that I have helped people see where they live and helped them change their perception of Folkestone.   That sounds perhaps a bit trite, but it’s massively important to me.  I think I have achieved something.  Yesterday, a guy came into the gallery with his daughter who was maybe 12 or 13 years old.  He was saying that he never goes to these places that I’ve painted, and he was so nice to me that when I was telling my wife afterwards, I choked up!  He was saying ‘you don’t know what you’ve done for this town.’

Shane found it lonely in the gallery, so he got his Beagle dog, Charlie, for company.  Charlie’s been trained to ring a little bell by the door when he’d like to go out or have some food.  He was asleep in his basket due to the very long walk they’d had that morning.

“There are really amazing views of Folkestone, and I don’t have a favourite.  It depends on the conditions in lots of places.  You never know what you’re going to find.  Sometimes, down at The Warren, when it’s a bit cloudy, or just after it’s rained and the sun comes out, you get some bits lit up, and some that aren’t.  It’s lovely and crisp and clear in the winter.  There are gorgeous colours there, it’s just beautiful. Conditions are so important, which is why you have to always have fresh eyes.  Keep your eyes fresh because you will spot things all the time, wherever you go.

“I love the Harbour, I love Sunny Sands beach.  I also love the East Cliff, and there’s also the Downs.  There’s such a lot here that’s very very picturesque and really interesting.  I like to think I don’t stick to the most obvious views.  If you find something visually interesting and paint it, then the chances are people will get what I’m trying to do.”

Shane Record is a contented man, with his dog, in his studio.  It looks out on The Old High Street and he says he has a lot of thinking time!

“I love my work, I really do!  That man that came in yesterday, it makes me really proud to have touched a lot of people you know?  By not trying to be too clever.”